Our second day in Oslo was a Sunday. After breakfast, I walked over to the St. Olaf Church near our hotel to hear Holy Mass. The 8 am mass was in the Polish language, but I stayed on to finish the rites. (English masses were held at 10 am and 6 pm at this church.) 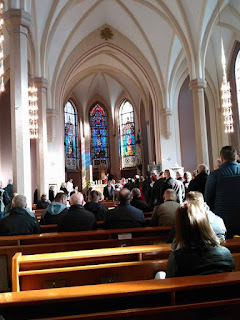 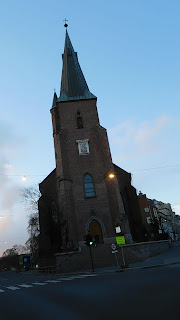 At about 9:30 am, we walked towards the wharf area, which was about 15 minutes or so away from our hotel. Along the way to the harbor, we saw the Oslo City Hall (with its sweet sounding carillon) and the Nobel Peace Center (a museum I tried to enter twice during our stay, but failed to do so both times). 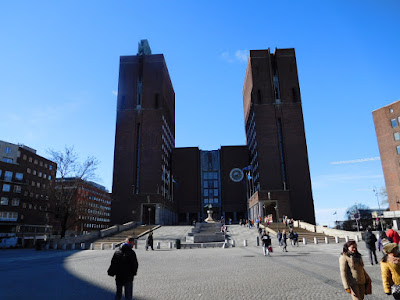 The City Hall of Oslo 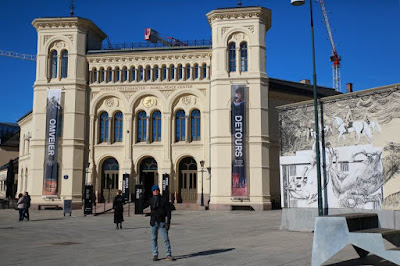 We arrived just in time for the departure of the boat called Helena, which was to take us on a  cruise around Oslo Fjord. Geologically, a fjord is an inlet with steep cliffs along its sides formed by erosion by glaciers. 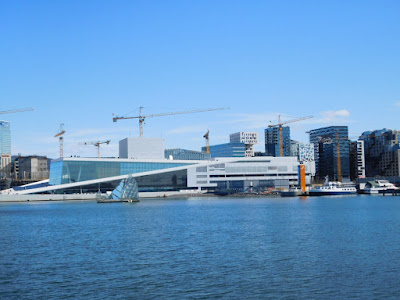 The Opera House, "She Lies"
and the buildings of the Barcode 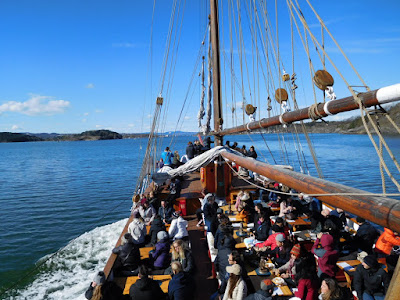 Sailing on the Helena

We saw the various islands around the fjord with those aesthetically-appealing houses painted in bright colors. We passed the Oslo Opera House and the sculpture of steel and glass called "She Lies" by Monica Bonvicini floating in front of it. The place where Edvard Munch painted his iconic painting "Scream" was also pointed out. The hot choco with cream I had on board for 33 NOK was excellent. 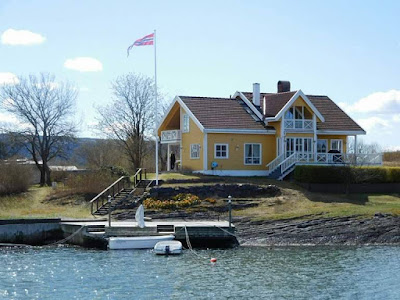 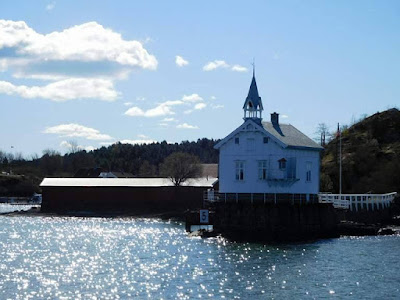 Truth to tell though, after the initial thrill of the boat ride and the chilly sea wind, there was not really much places of interest to see around this fjord. The two-hours we spent on the boat felt very long. We had our lunch of salmon at the Hard Rock Cafe along the main Karl Johans Gate street, after which we had to rush and catch our 2 pm appointment for a tour inside the Oslo Opera House. 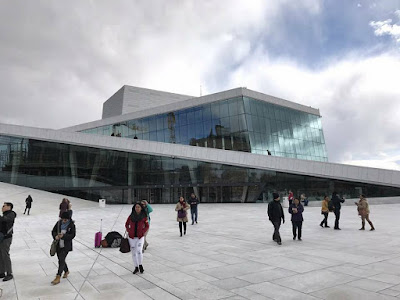 The Opera House is a white building on the waterfront, inaugurated last 2008. The slanted sides allowed people to walk up to the roof to view panoramas of the city. The lobby is surrounded by tall windows of glass to view the water. Like what we saw in the airport, the interior had accents of light-colored oak panels. 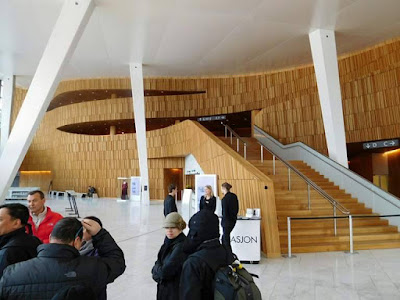 During the intermission of the opera playing that afternoon, our guide took up to the balcony of the main auditorium to see the stage. The oak panels inside was acoustically treated, giving it a darker hue than the oak panels outside. On its ceiling, there was a very big oval chandelier made of handmade crystals. An interesting feature of the seats were monitors for the electronic libretto system translating lyrics in Norwegian and English. 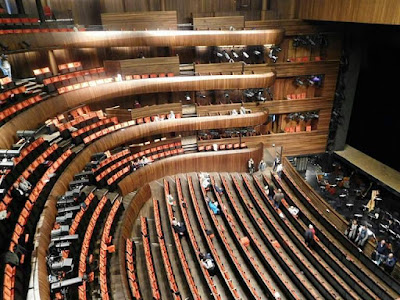 Then our guide took us backstage to peek inside the costume department and the scenography departments, all richly endowed with very impressive equipment and inventory, obviously generously supported by the government and its patrons. During this whole tour, I was wishing that someday our very own Cultural Center of the Philippines can also have the budget to be renovated like this.

Later that afternoon, we were brought by bus to picturesque Bygdøy, a peninsula within Oslo city limits that is the site of the summer residence of the King of Norway, as well as five national museums. We went to one of those museums this day -- the Kon Tiki museum. 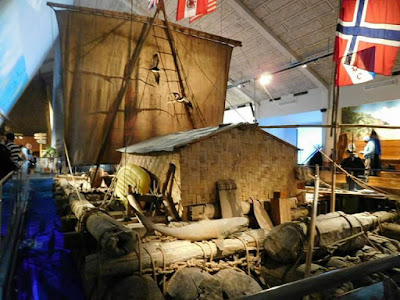 I was familiar with the tale of Thor Heyerdahl and his Kon Tiki expedition because of the recent Oscar-nominated Norwegian movie of the same title (MY REVIEW). This museum contains the Kon-Tiki, a raft of balsa wood of pre-Columbian model used by Heyerdahl used to sail from Peru to Polynesia in 1947. It is also houses the Ra II, a vessel built of reeds used by Heyerdahl to sail from North Africa to Barbados in the Caribbean in 1970. 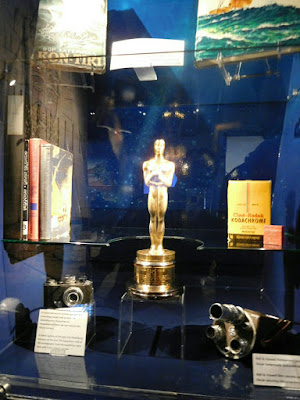 For a film lover like me, a high point was seeing the actual Oscar statue Thor Heyerdahl won in 1951 for his documentary about his Kon Tiki expedition. There were also film showings of this documentary at the museum but sadly we did not get to watch it.

Before dinner, we passed by the Magic Ice Bar. The gimmick of this bar was the -5 degree Celsius inside. You can choose alcoholic or non-alcoholic drinks. For me though, the novelty wore off quickly after taking some photos inside that blue-lit room with ice sculptures. My roommate and I stepped out to purchase some souvenirs before walking over to the wharf for more photos and dinner at the Louise restaurant.

Epilogue:  We were not given the chance to climb up the roof of the Opera House when we went there. So on the last day, I took the opportunity before the airport shuttle arrived to hike on over there (about 20 minute walk from the hotel) to do this climb. It turned out to be quite an exhausting climb than I was expecting, but this final Oslo photo of mine was well worth the effort. On the Roof of the Opera House