The tour provider I booked, Catherine Lu Tours, had been very helpful during the planning of our visit to Beijing. I really wanted to see Xi'an and was excited that she had a itinerary going there from Beijing.

Our sleeper train arrived safely in the Xi'an train station promptly at 7 am. We made our way outside into the cold nippy air, looking out for our tour guide Kathy. Fortunately, it did not take long to find her. Our first taste of Xi'an was that busy city square with a beautiful huge ancient wall surrounding. I am very excited to see more. 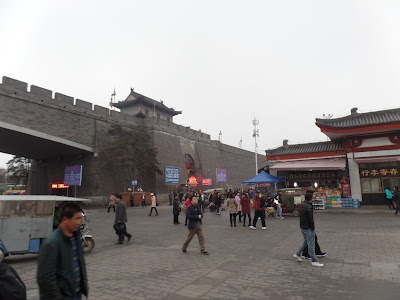 
Before we went to the van, we bought breakfast meals take out, where else but McDonalds! Haha! I bought their unique Red Bean Pie to taste, and it was quite good. The drive out to our first destination took about two hours, while Kathy was telling us more about her hometown Xi'an. The roads were so wide and clean. The architecture was solid and imposing. I love it here already.

Xi'an (西安) is the capital of Shaanxi province, located in the northwest part of China. Xi'an was known as Chang'an before the Ming dynasty. It was the capital city of China under several of the most important dynasties in Chinese history, namely Zhou, Qin, Han, Sui, and Tang. Xi'an was at par with Cairo, Athens and Rome as one of the cradles of ancient human civilization. Currently, Xi'an is recognized as an important educational centre, being the home to several universities, second only to Beijing. It is also the site of facilities for research in the areas of national security and space exploration. 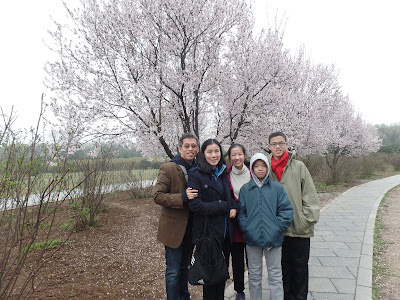 For tourists, Xi'an is most well-known as the home to the Terracotta Army of Emperor Qin Shi Huang, the first emperor of the united China. In 1974, farmers found the terracotta figures in a field when they were digging a well. Since then, four huge pits of terracotta figures consisting of warriors, chariots and horses have been unearthed. If I understood our guide correctly, they have stopped excavations currently until they can discover a process to prevent the colors of the figures from disintegrating upon exposure to air.

The site of Terracotta Army pits is now developed into a huge tourist complex. We first walk through a town center with several shops and restaurants. After the guide got our tickets from the main gate, there is still another long walk through a beautiful garden with cherry blossoms. Admittedly, seeing these cherry blossoms here in Xi'an was a most unexpected exciting surprise for us all. We had a field day taking photos among these delicate white and pink flowers. 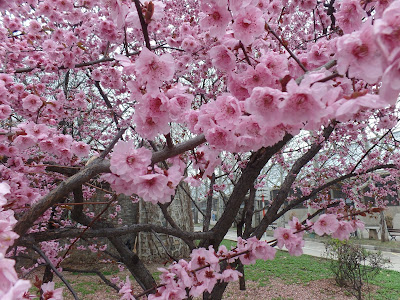 The first thing we did there was to watch an informative film showed in a 360-degree theater area. There was a gift shop outside the theater with souvenirs and books. One of the original farmers who found the terracotta warriors was in the shop that day to sign autographs for the coffee-table books being sold there. After looking around the shop, we proceeded to visit all the pits and the museum. 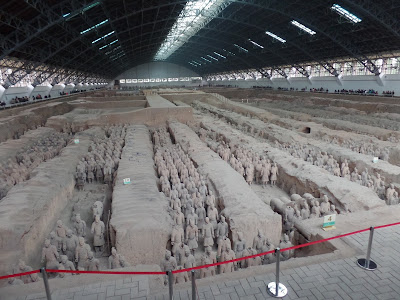 Pit 1 is 230 m. long and 62 m. wide divided into 11 corridors, containing the main army of more than 6,000 figures.  I have seen some warriors when they visited Manila when I was a child. I had seen a warrior in the Johnson and Johnson booth in Beijing during the 2008 Olympics. But these cannot compare to the most awesome view of seeing all these warriors in their glory in Pit 1. Pit two has cavalry and infantry units as well as war chariots and is thought to represent a military guard. Pit three is the command post, with high-ranking officers and a war chariot. 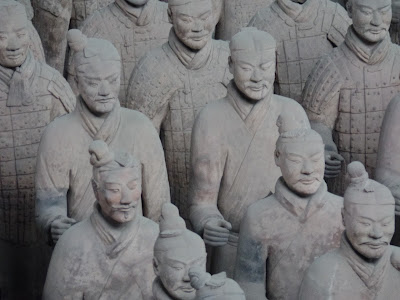 The museum contained the metallic chariots which were really spectacular to see up close behind their glass cases. We also saw individual warriors closer up, one from each rank or position. There were really a big crowd gathered around these exhibits so it was not too easy to take pictures. 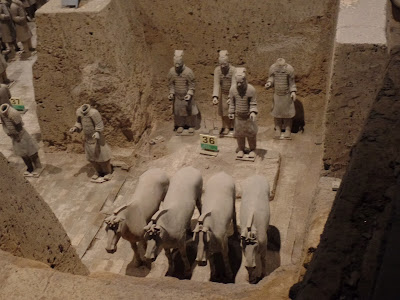 We had a sumptuous lunch in the dining room of the museum. Our guide wisely brought us up to lunch at 11:30 before the rest of the tourist horde came in at around 12nn. The restaurant was already very noisy and crowded by then. After lunch, we left the Terracotta Complex to head back into the city. 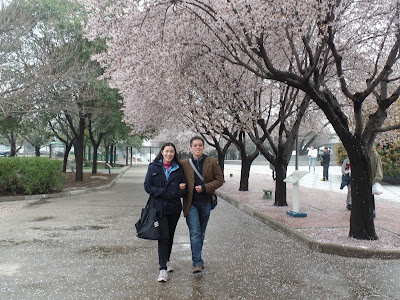 Our first stop back in the city proper is the Big Goose Pagoda. Honestly, when I read this destination in our itinerary, I was not really too excited about it. However, when we actually got to that area, I was so wrong with my expectations! It was a most picturesque and interesting place. The landscape of the park around the pagoda had been designed to be so modern and spectacular, in sharp contrast with the ancient pagoda itself. 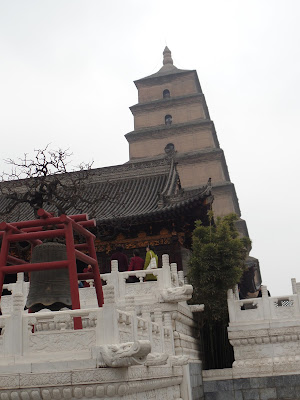 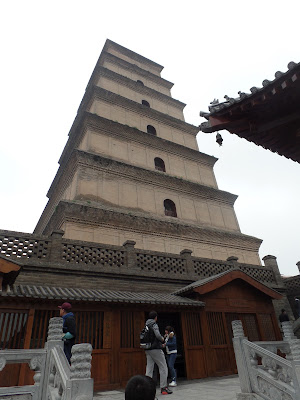 It was not part of the tour, but the kids wanted to go up the pagoda. My wife begged off from this exercise, so I went in with them. There was nothing much to see inside. But we certainly got a much better birds-eye view of the beautiful park around the pagoda. I wanted to stay in this place longer, but our guide still had to check us into our hotel. 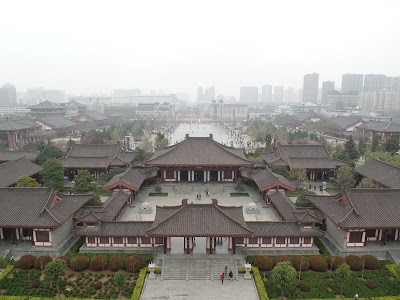 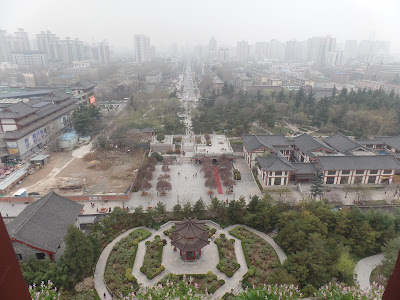 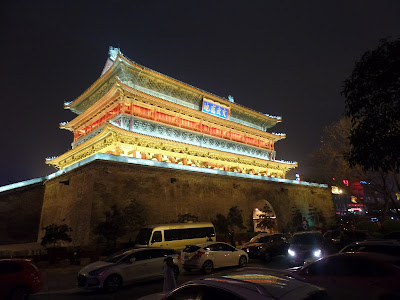 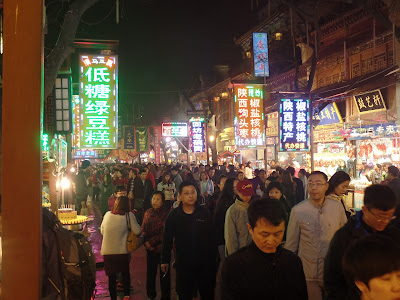 We had dinner at a local noodle house. I have to say that the taste needs getting used to. After eating, we walked around the busy night market. My expert bargain hunter wife was able to buy me a set of model terracotta warriors for a fraction of the initial price quoted. We walked back to the hotel and had a good night's sleep.

After breakfast, Kathy met us at the hotel, and we checked out already. We spent the rest of the morning going around Muslim Street for more shopping. The lights we saw last night were still lit up even during the morning and the atmosphere of the place was just as frenetic. We ate lunch at a special dumplings place, which was very very busy. 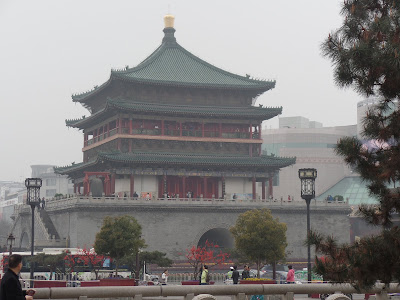 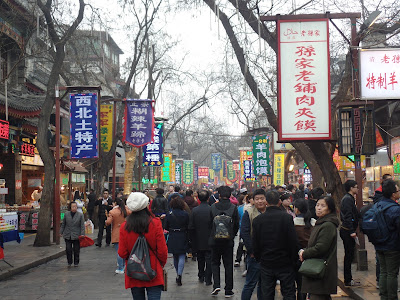 After lunch, we decided to forego visiting inside the Bell and Drum Towers as we already admired them from the street. The kids were not really interested in looking inside another temple-like building anymore. I requested if we could go back to the beautiful water garden which we saw behind the Big Goose Pagoda. Kathy acceded to our request. As a credit to this tour group, she returned to me the money that was for the towers tickets. I found this a very fine gesture indeed from the company we really appreciated. 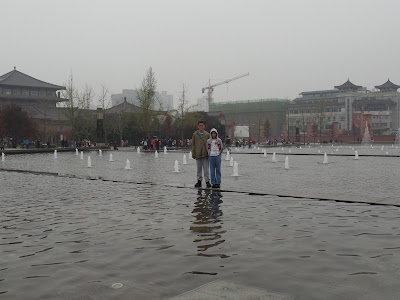 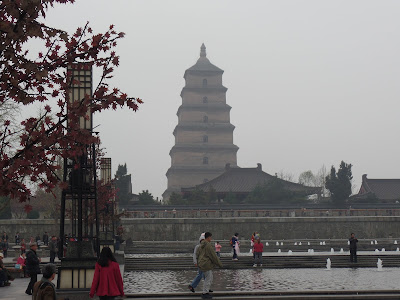 We had fun taking pictures in the picturesque park. It was just too bad that we were not able to see the musical water fountain show in this area at night. The previous night, I tried to find out how to get here from our hotel, and we had to take two or three buses! We did not want to take that risk anymore.

For our final attraction in Xian, we went up the City Wall. I never thought I would find this to be my absolute favorite place to be. The area on the wall was vast -- so much bigger and expansive than anything I was expecting. The guide told us that an international marathon was held ON the wall every year! You can rent a bicycle (or a tandem bike) and ride all around the wall. Too bad we did not have enough time to do that anymore. I really love this place. I wanted to stay there for the rest of the day. 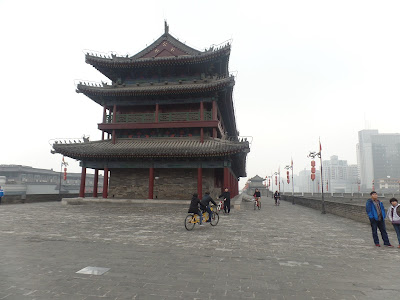 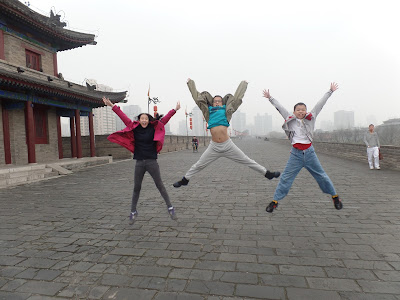 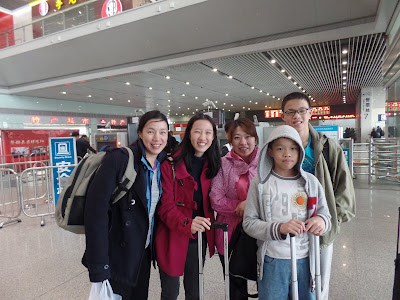 Photo with our guide Kathy

Unfortunately, we had a train to catch. On our way back to Beijing, we were booked on a "Speedy" Train. We had a smooth comfortable ride. The stations along the way all look very neat and clean. We brought our burgers to eat on the train, but we just slept most of the way. We reached Beijing at around 10pm. Our driver was there to pick us up and bring us back to our lodgings. What a memorable side trip this was! I want to go back to Xi'an someday.