We continue our tour of Beijing today with Sophie, care of Catherine Lu Tours.

The Great Wall of China runs east to west along the historic Northern boundary of China to protect the kingdom against attacks by nomadic Eurasian invaders. Presently, the wall built during the Ming Dynasty (1368 - 1644) is the most often seen and best preserved, running over 500 kilometers. The wall at Badaling is said to be the most popular, tourist-friendly and commercial. The other parts of the wall open to visitors are Huanghuacheng, Mutianyu, Jiankou, Gubeikou, Jinshanling and Simatai. 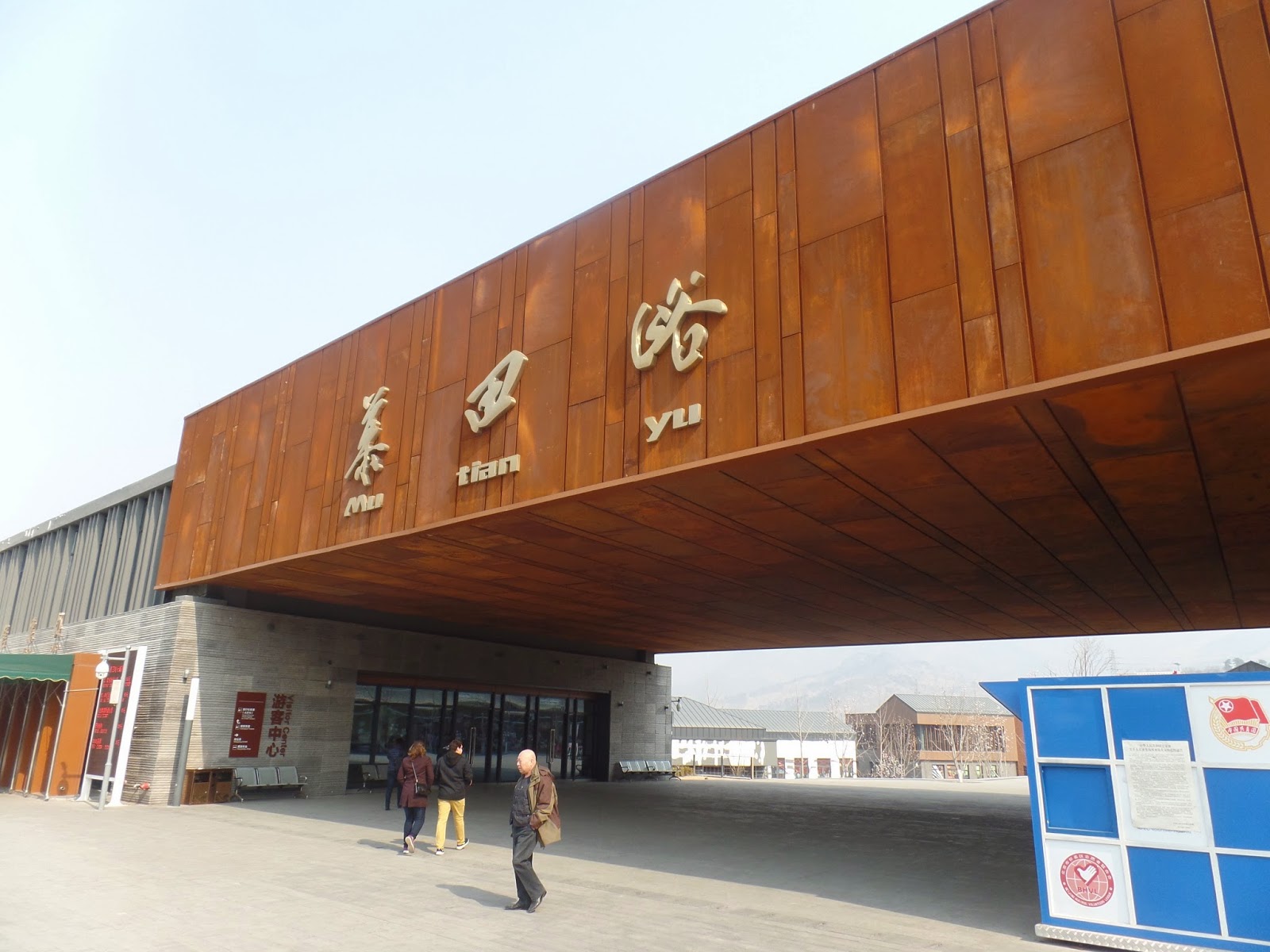 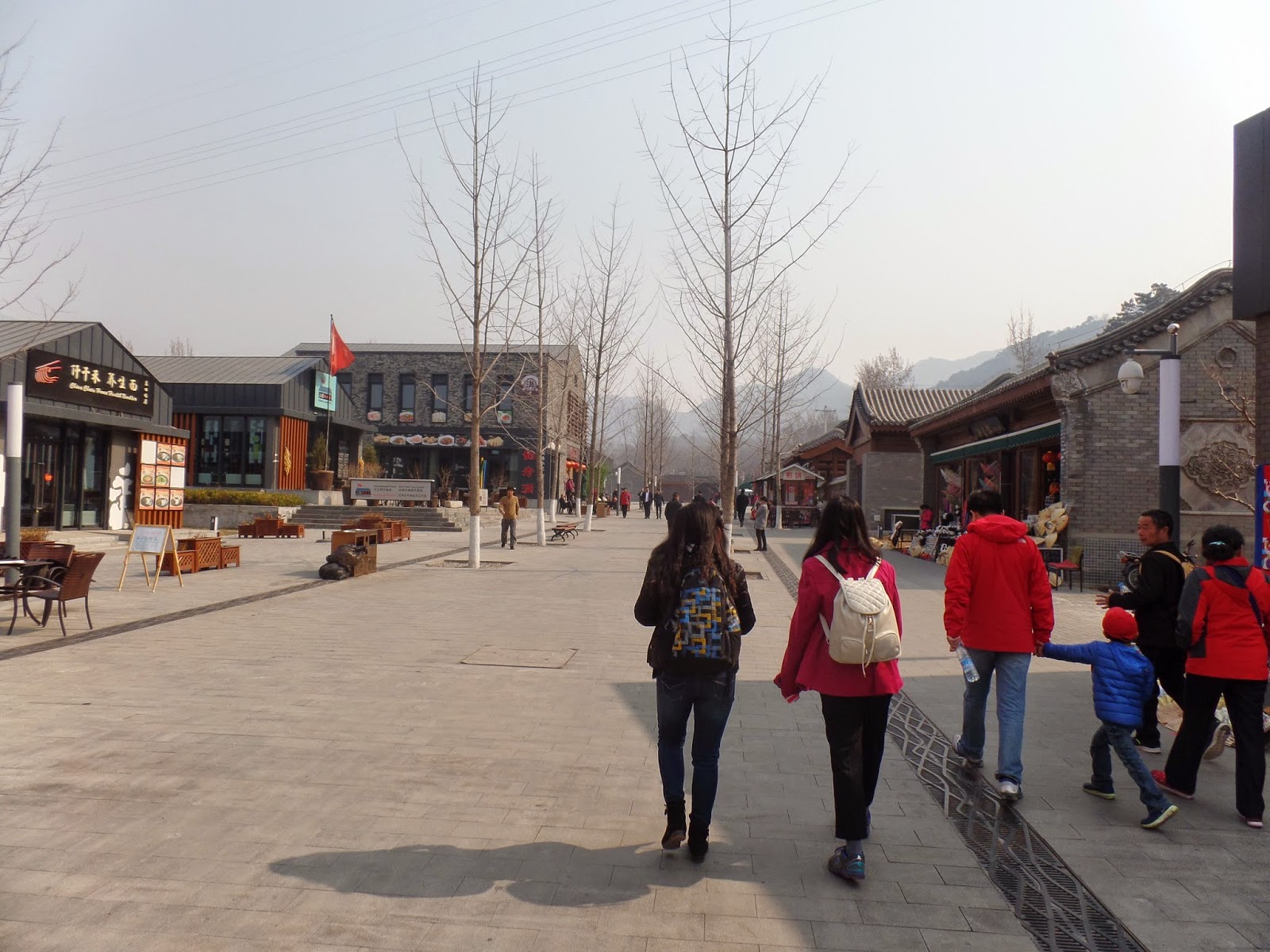 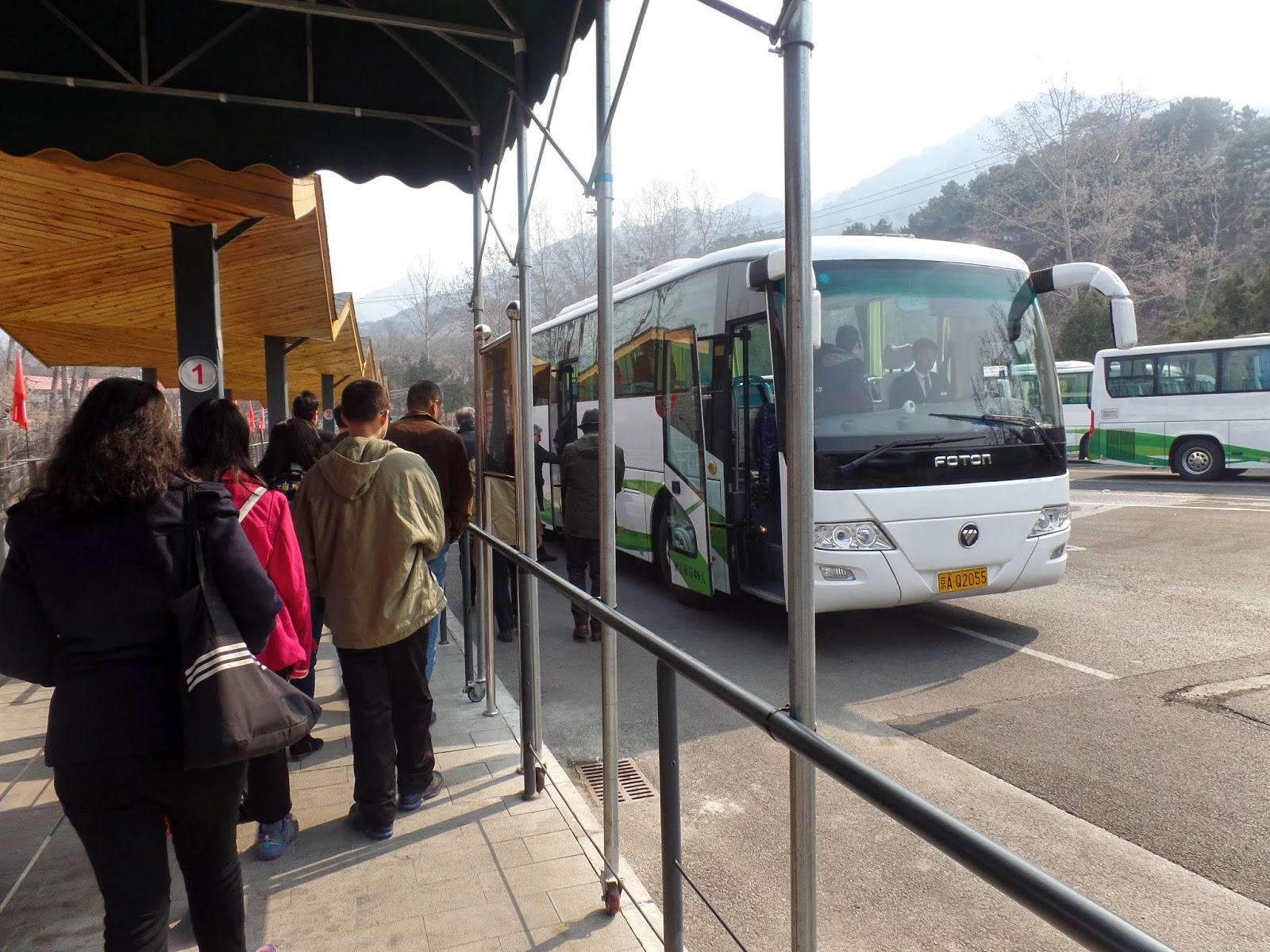 During my last visit to Beijing in 2008, I visited the Mutianyu section of the wall. This part of the wall was lesser known, further out and had less tourists. Not really true on the last point the last time I was there. I did not mind that Sophie brought us to Mutianyu again this time. I knew my family will have a great time with the chair lift ride up and the toboggan slide down that I enjoyed the first time I was here.

When we arrived, the whole place looked so different from how I remembered it. Back then there was a just a big parking lot where I was dropped off and the ticket booth was right there already. Now there are a huge buildings, underground parking and a shopping and restaurant complex. After walking through, we have to ride a bus (fare 10 CNY) to be brought to the wall proper. There it looked familiar already for me. 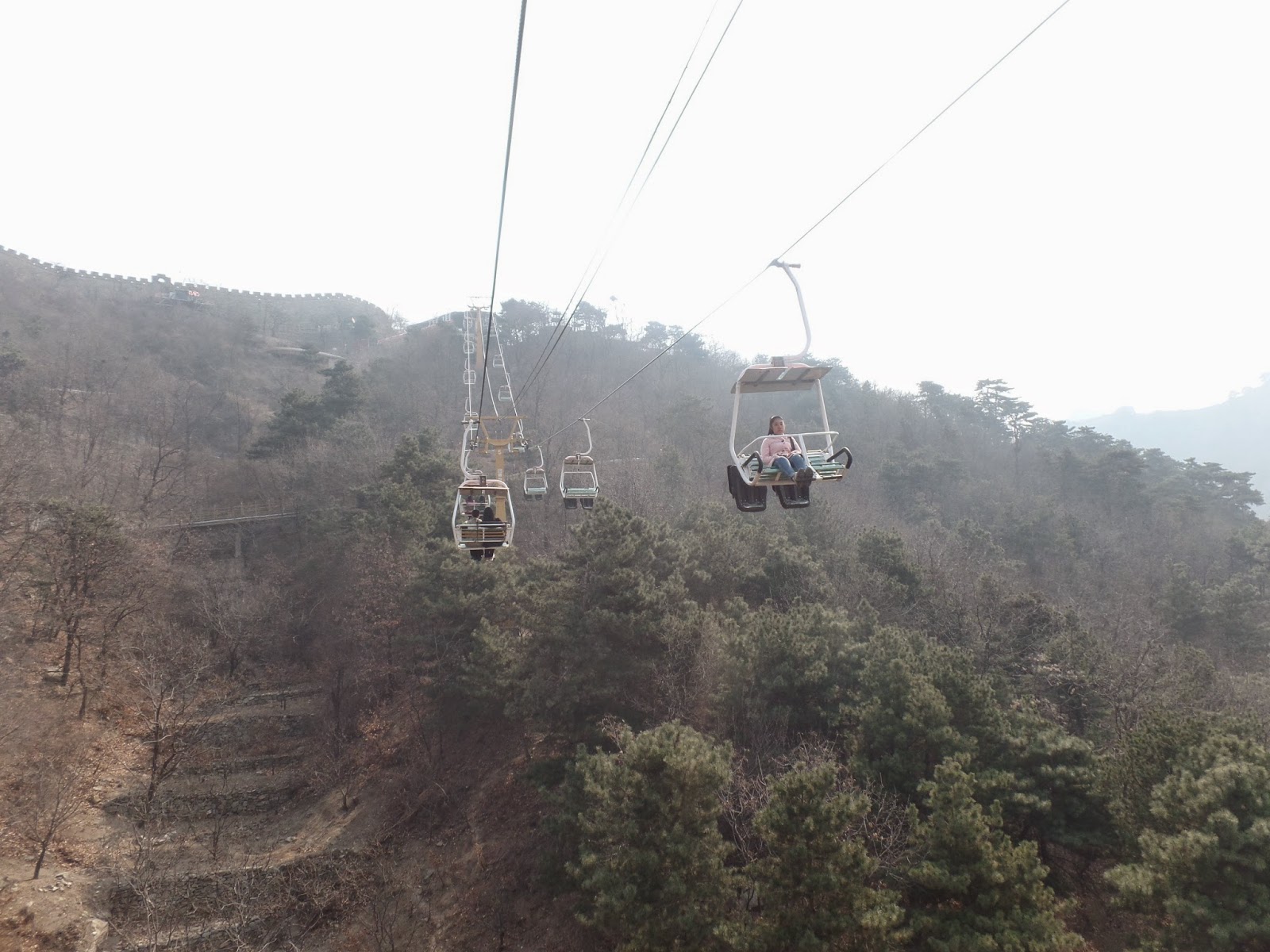 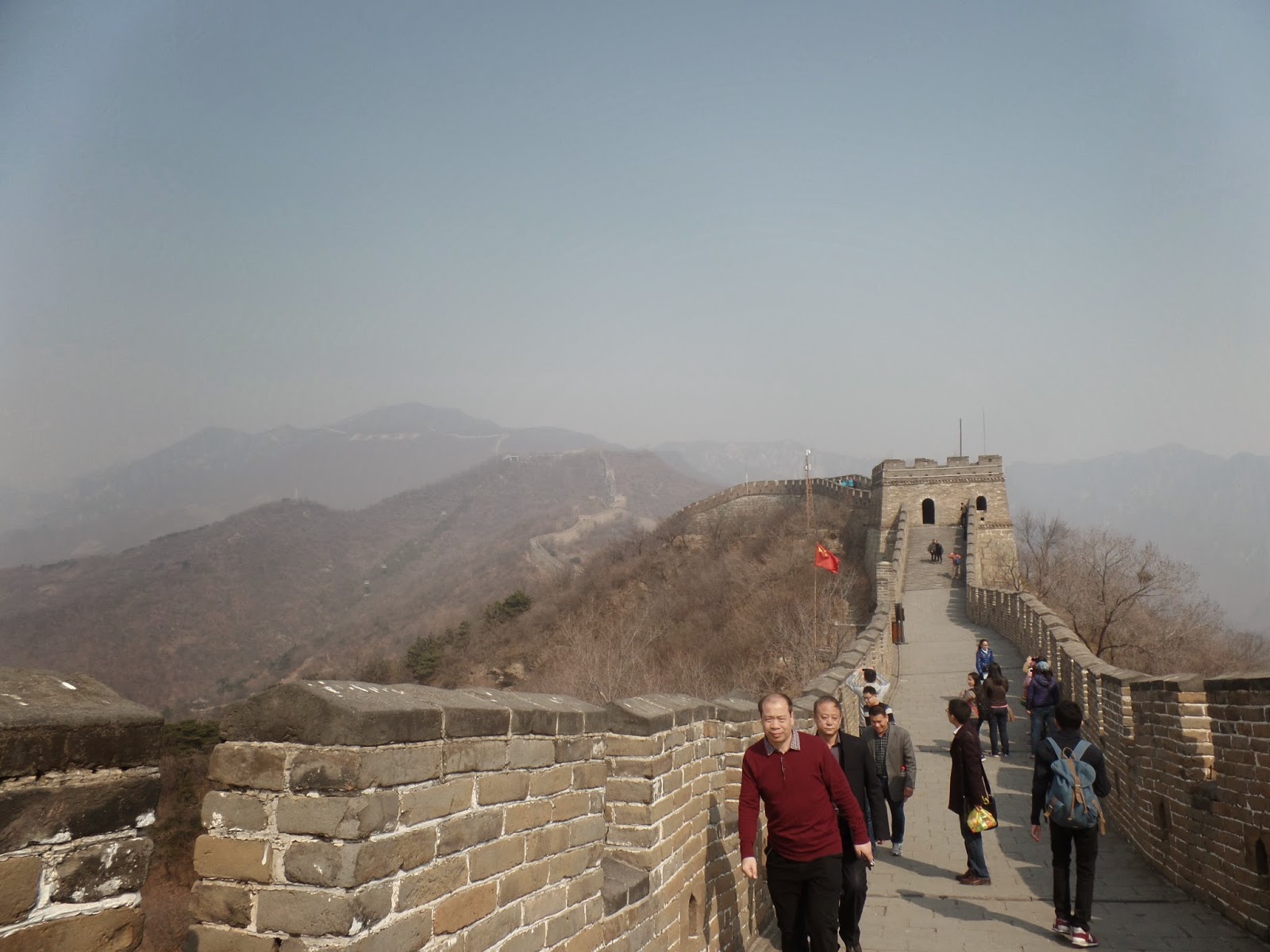 We rode the chair lift up to the wall, two people per chair. The cold morning air was very nippy on the way up. When we reached Station 6, we decided to trek the usual route from Station 6 to Station 14, where the cable car platforms were located. The cable cars are another way to go up and down from the wall, but this service is provided by another company from the chairlift/toboggan way. 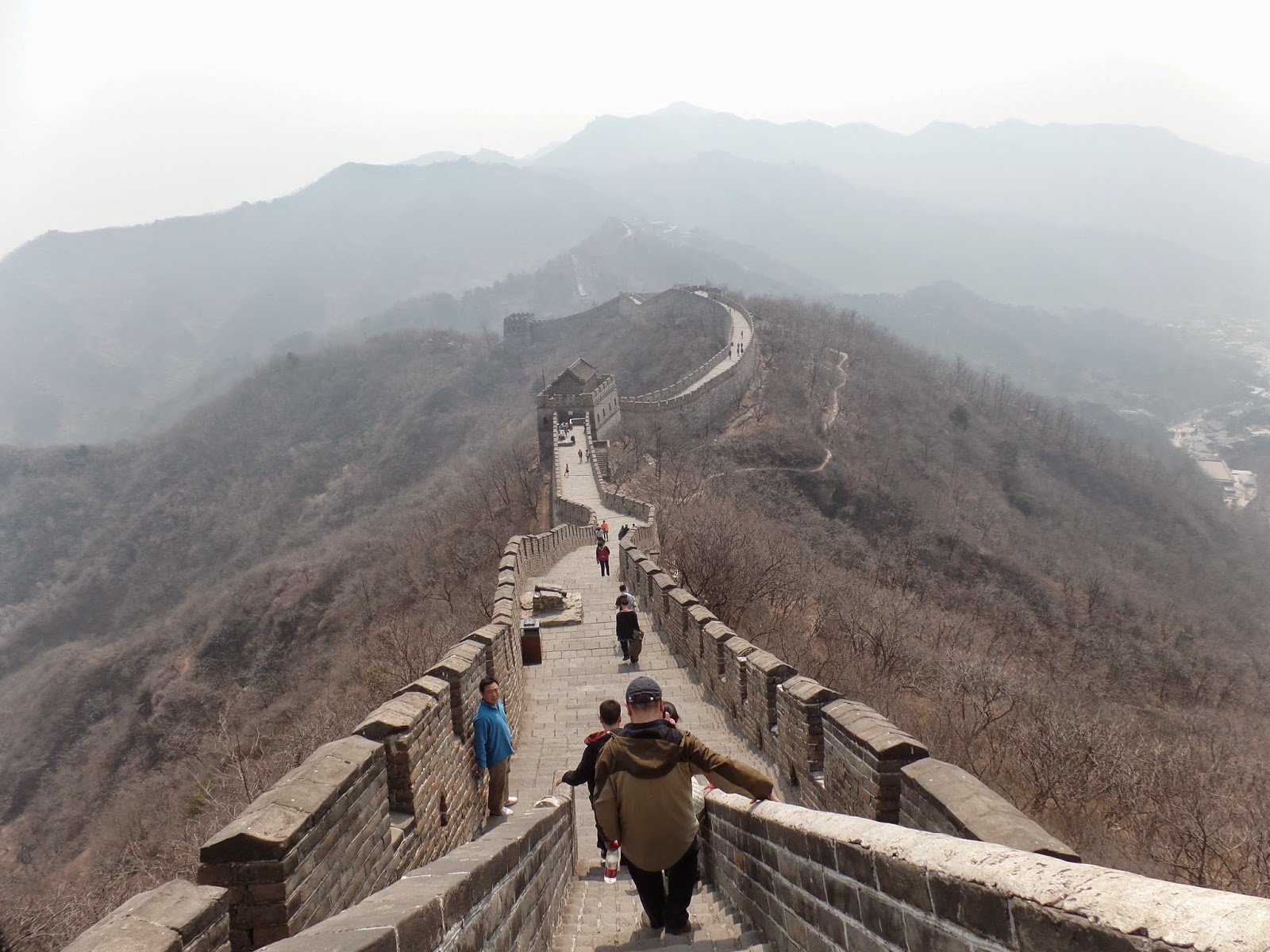 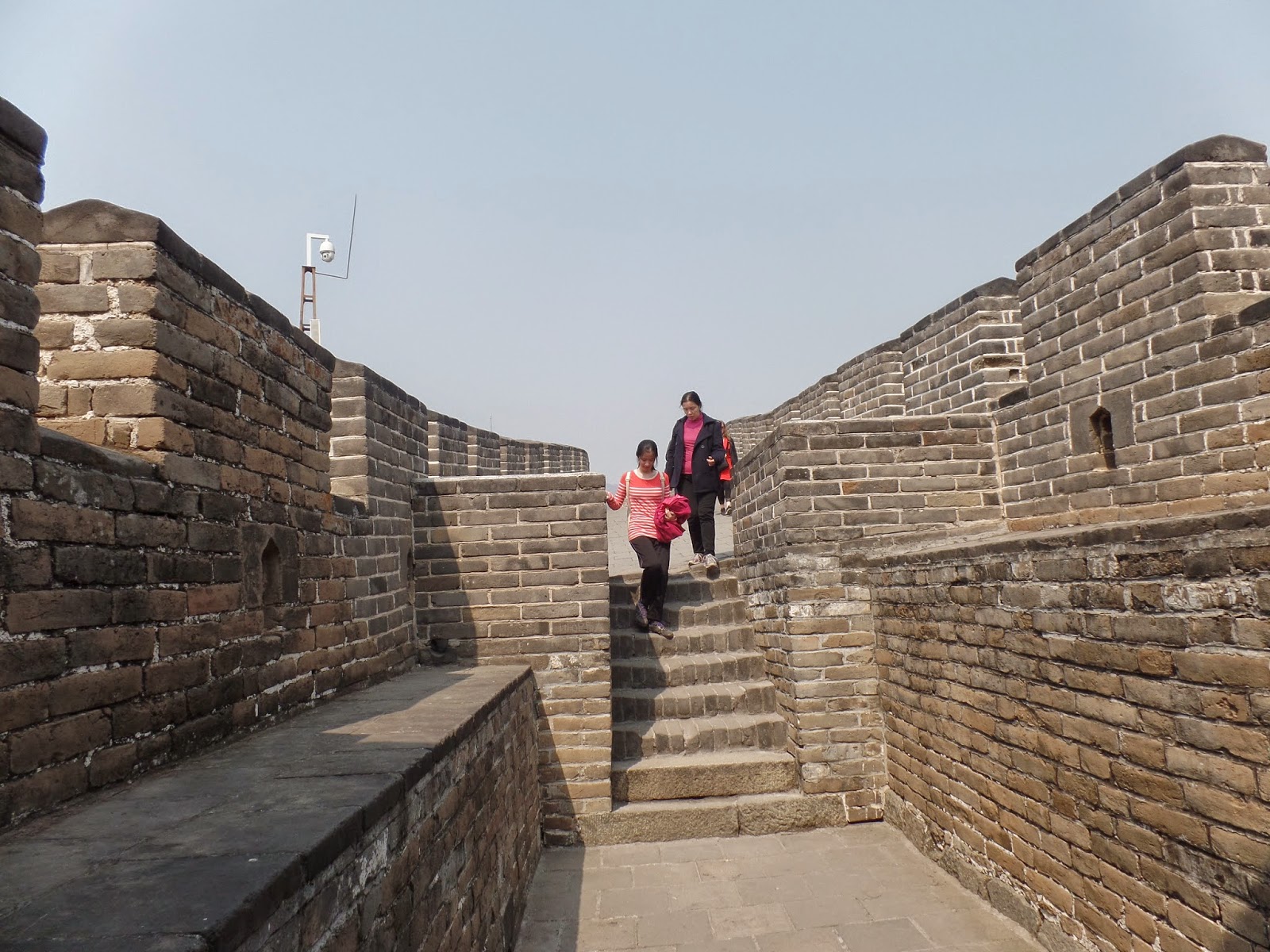 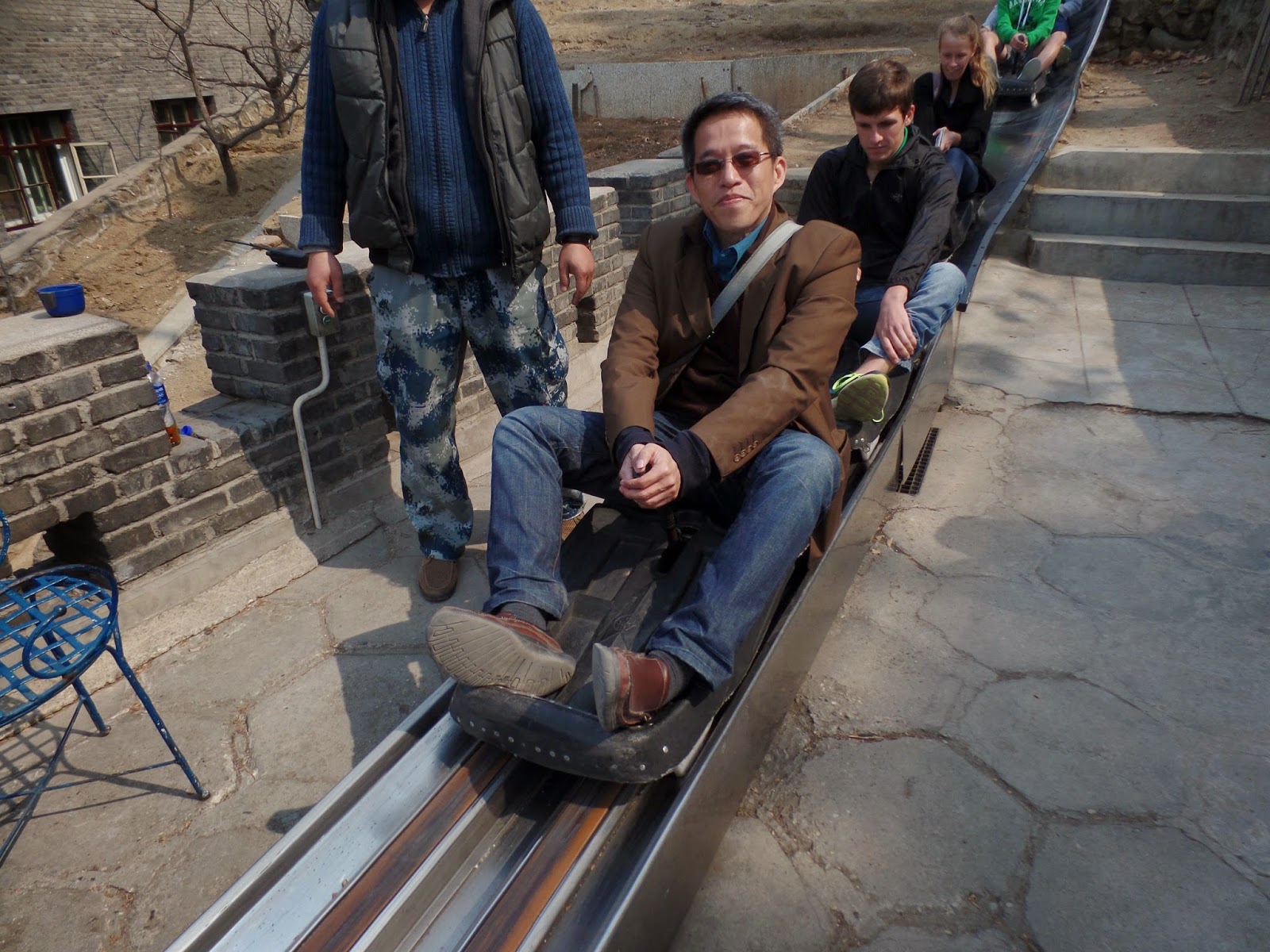 The hike on the wall was as difficult as I remembered it, but the view is nevertheless as awesome as ever. The hike on the way to Station 14 was mostly going upwards, and this was an exhausting cardio workout. We were peeling off our layers of coats one by one as we were hiking. When we reached that punishing final climb of 200 steps from Station 13 to 14, I was huffing and puffing. Haha! When we all reached the top, the feeling of accomplishment was amazing. The hike on the way back to Station 6 was more a challenge of keeping a sure footing and balance. We took about an hour hiking forth and back, including plenty of rest stops and picture taking. The toboggan ride downward was really fun way to end the whole experience. 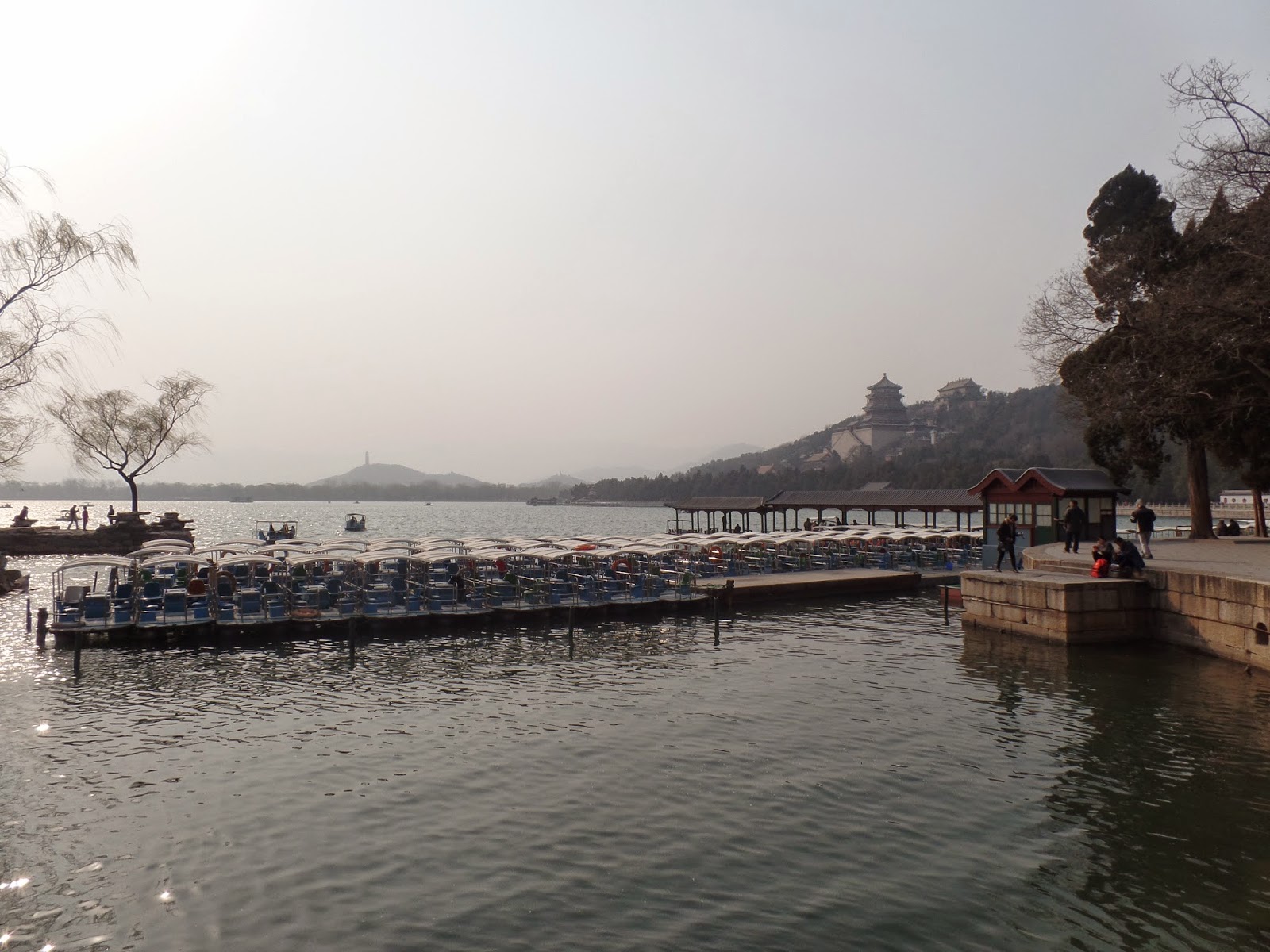 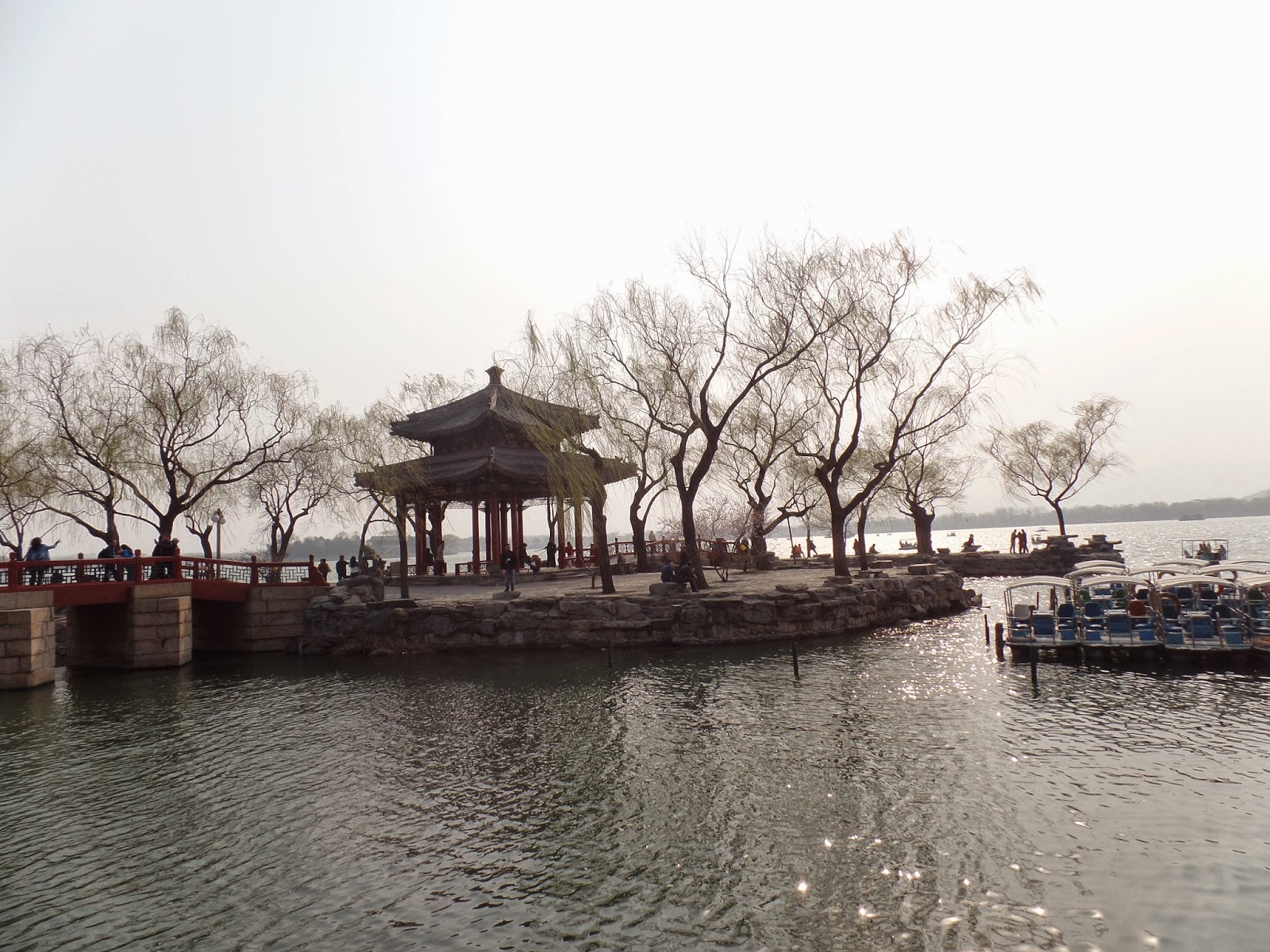 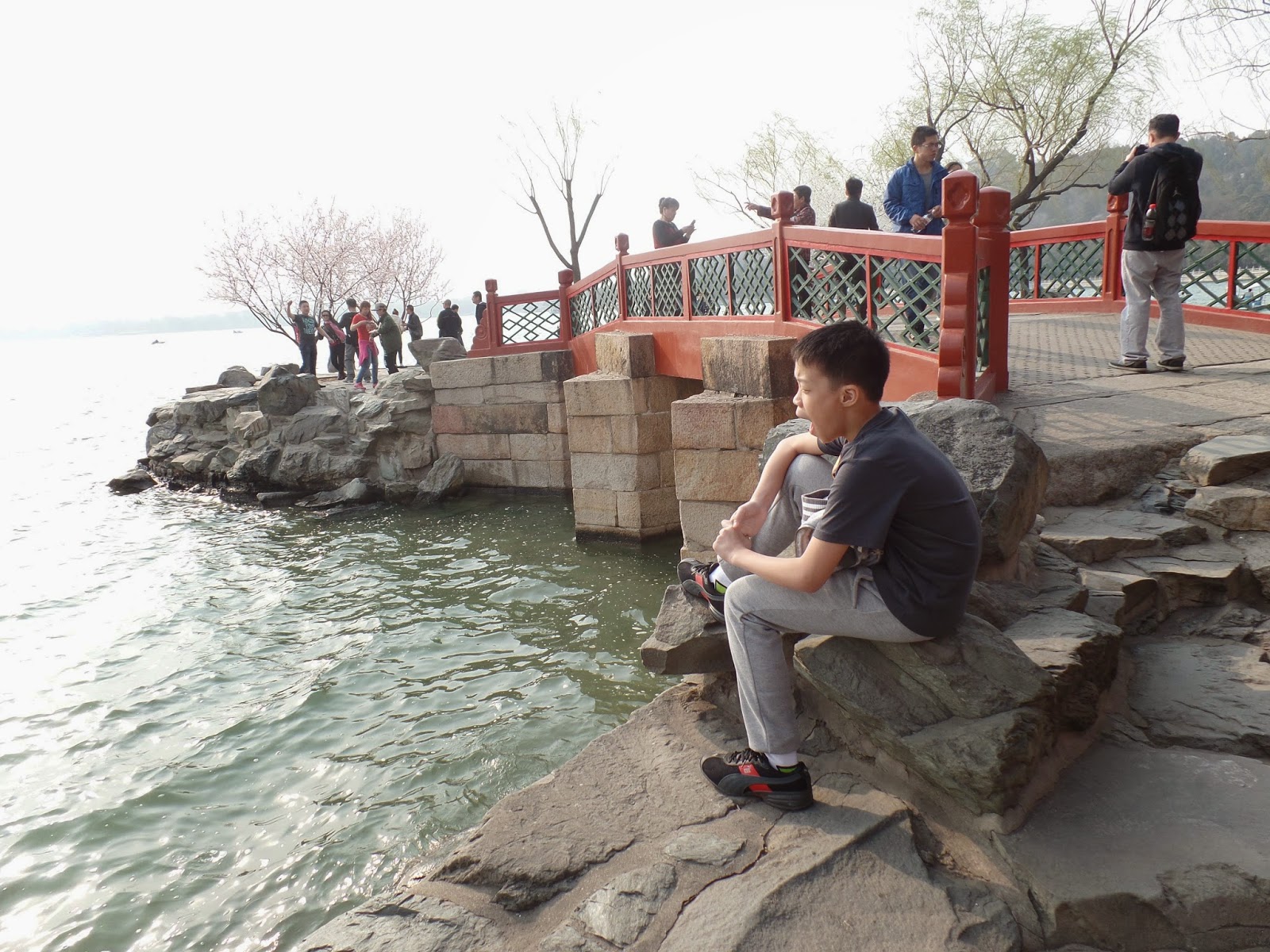 The landscape design of this Qing Dynasty palace reminded me very much of two beautiful cities near Shanghai which we have visited years back-- Hangchow and Suchow. Turns out, these two cities were also the favorites of the Emperor Qianlong, and they served as the inspiration of this Palace which he dedicated to his mother on her 60th birthday. This Summer Palace is also the favorite retreat of Empress Dowager Cixi. We see several trees of her favorite flower -- the magnolia. 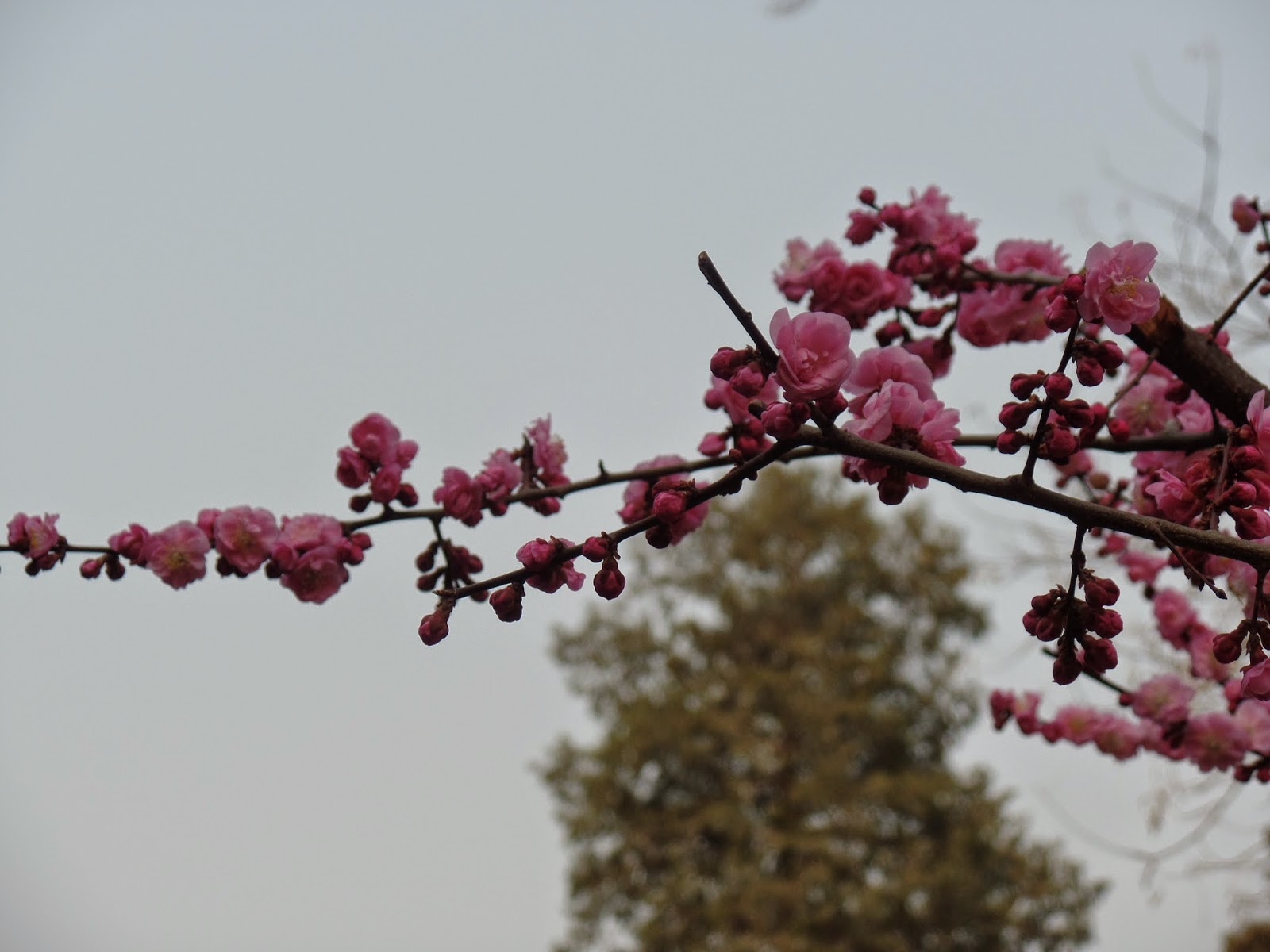 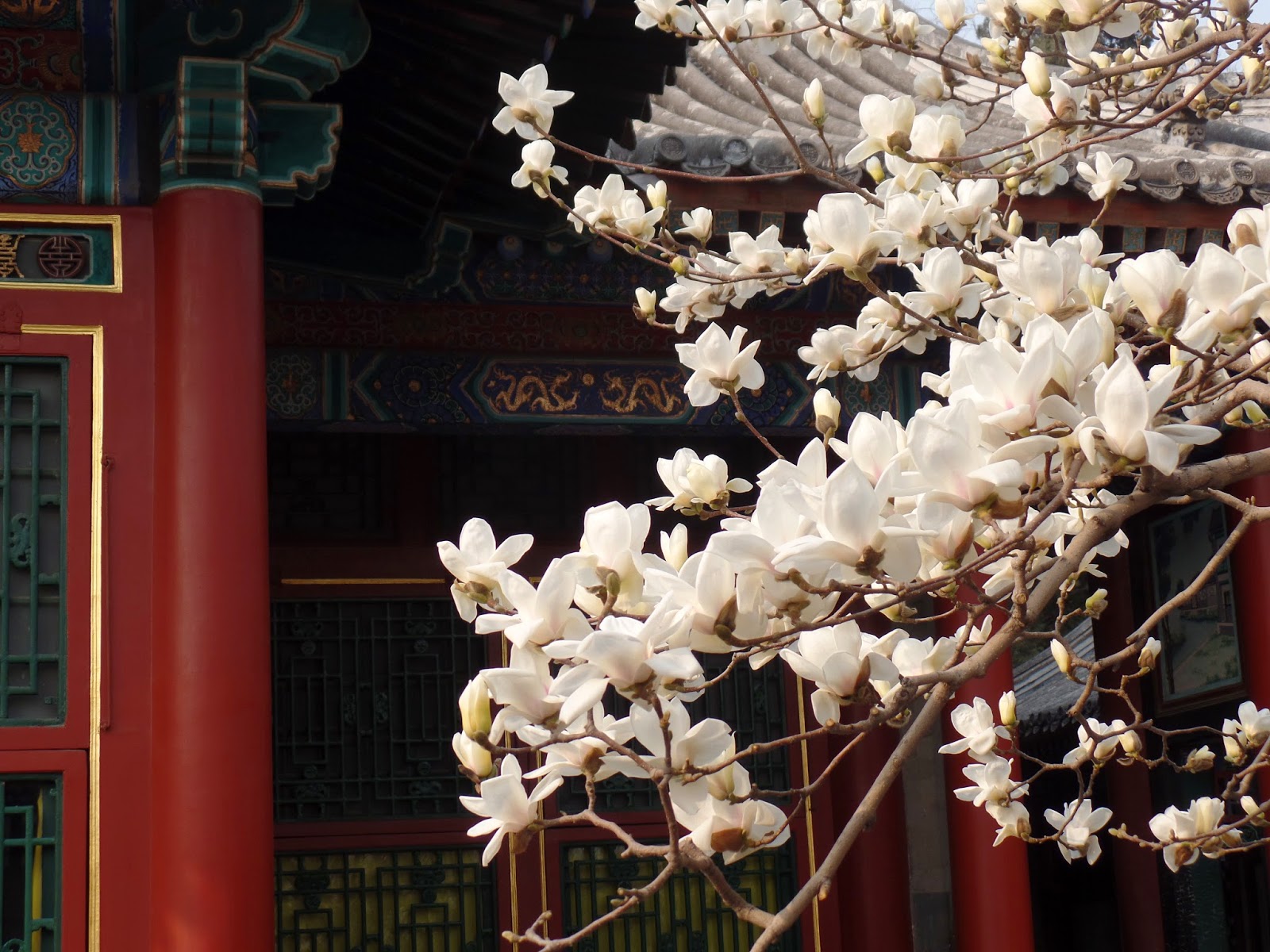 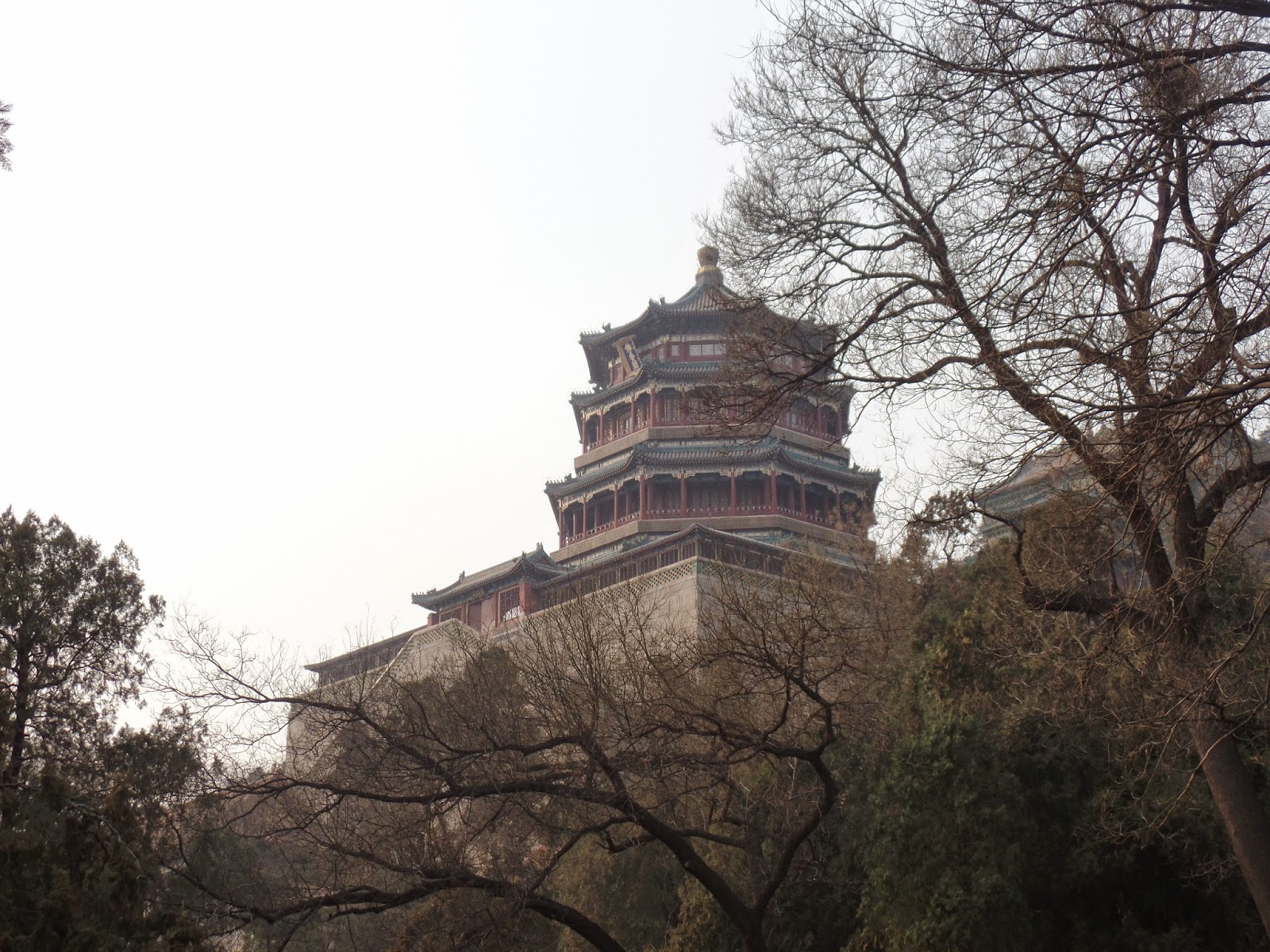 Like Hangchow, there was an expansive lake that dominated the grounds. 2.2 sq. km Kunming Lake is entirely man-made. The soil from that excavation was built up into a 200-foot high man-made hill called Longevity Hill, with its impressive structures. Midway into the garden, we saw what is said to be the world's longest corridor alongside the lake. The Summer Palace has been UNESCO's World Heritage List since December 1998. 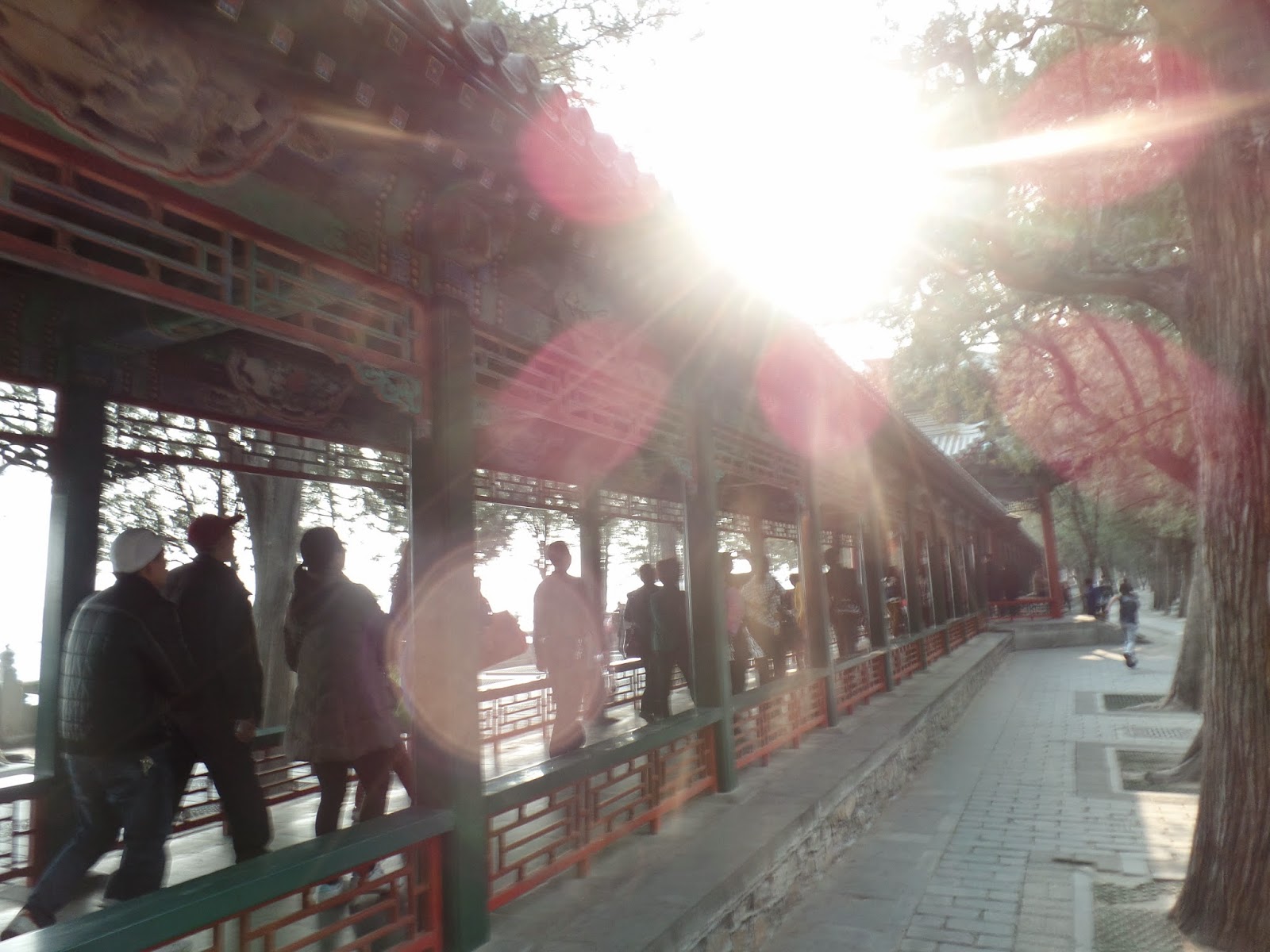 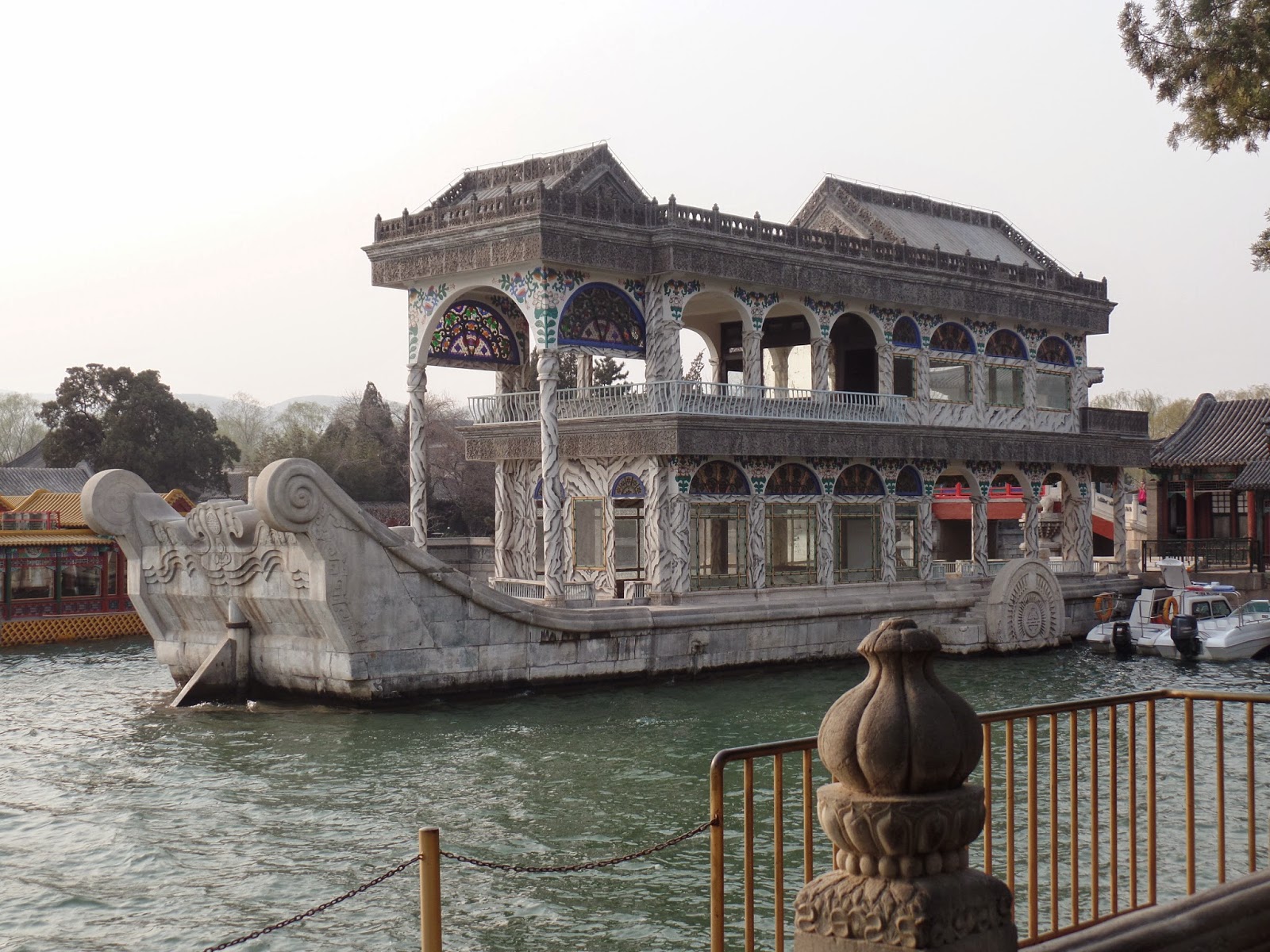 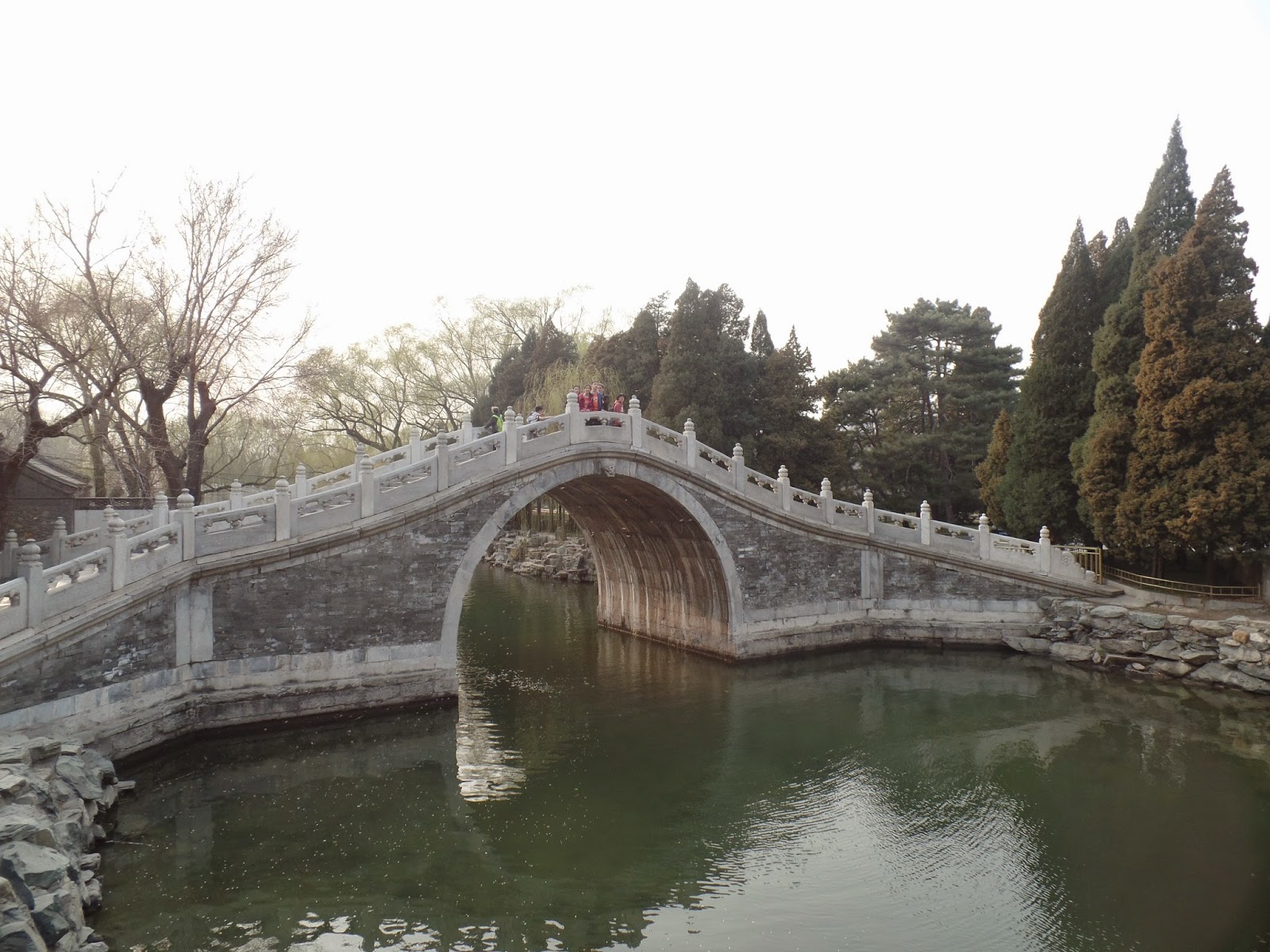 There was no more time to go back to the apartment. From the Summer Palace, we were taken directly to the train station where we will catch our overnight sleeper train to Xi'an which leaves at about 8 pm. That was such a busy busy place with huge crowds of people at all the waiting areas. We ate an early dinner at Yoshinoya. (Yoshinoya is really a favorite reasonable comfort food restaurant for my family. My wife and I have eaten in Yoshinoya not only in Manila, but also in Hong Kong and even New York City!) Then we proceeded to brave the sea of humanity waiting for the gates to open. I was already standing in line with my suitcase, but that did not stop an elderly couple to sneak in and stand in front of me, as if that was the most normal thing to do for them. 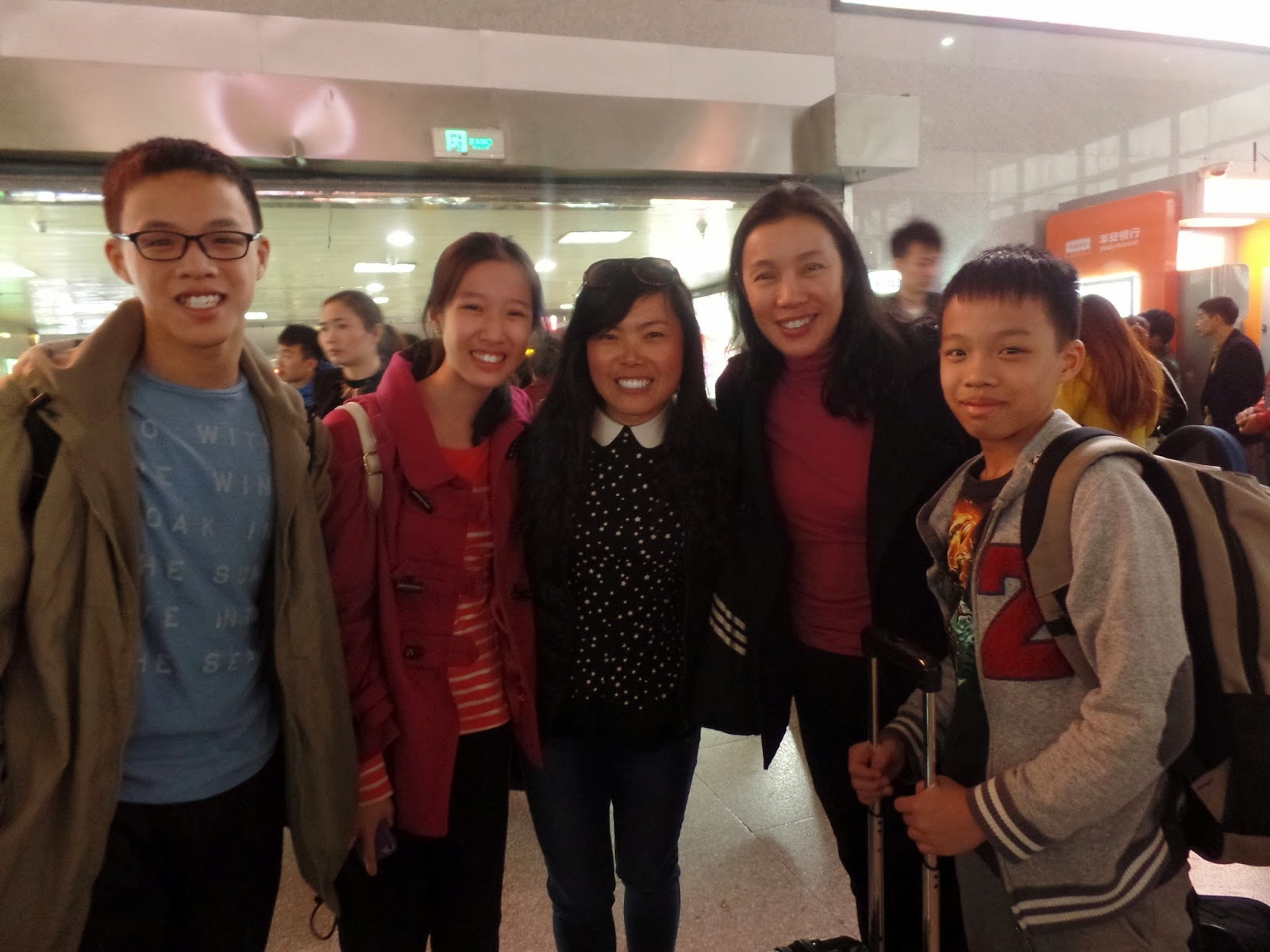 With our tour guide Sophie 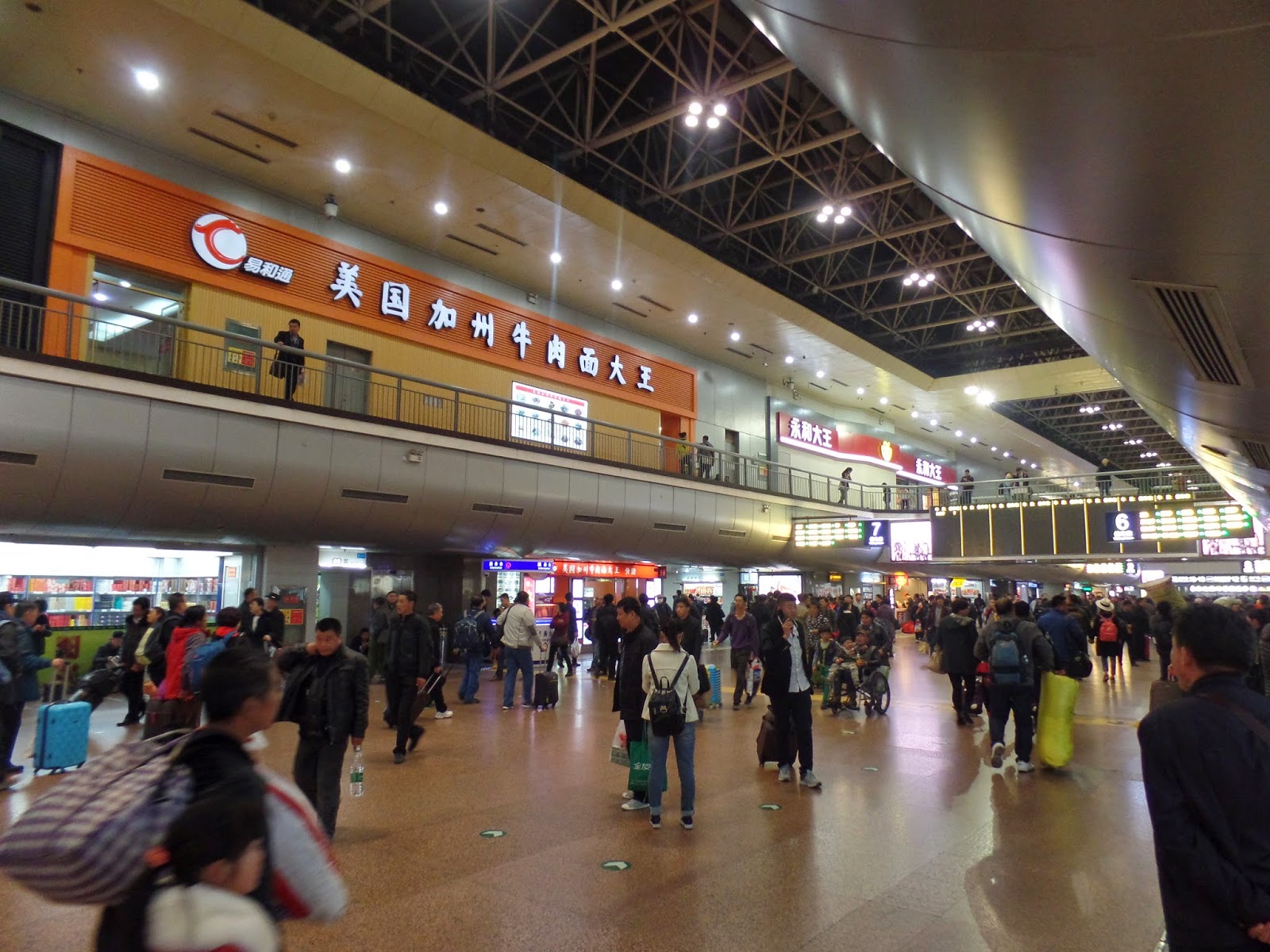 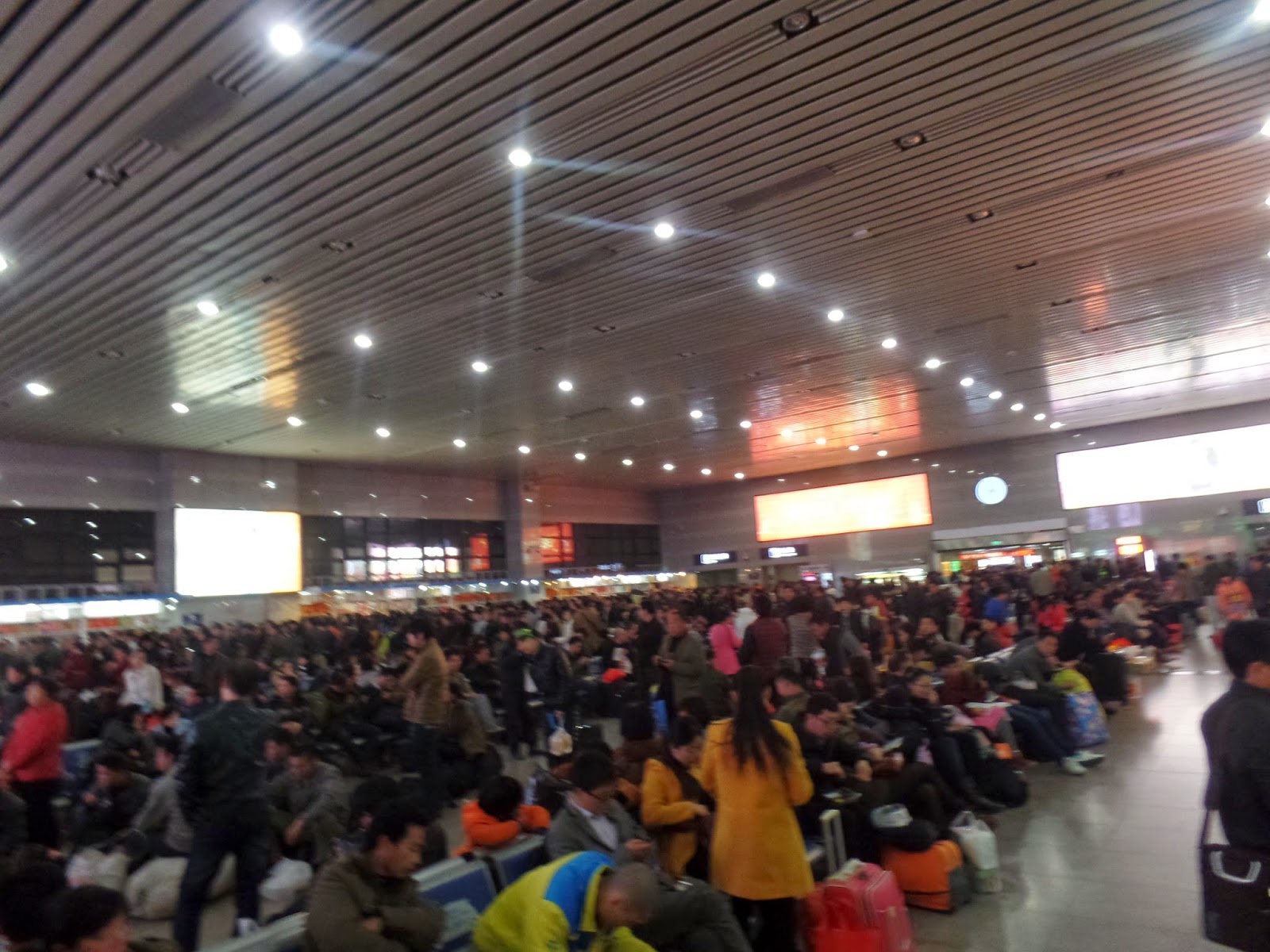 The gate opened about 30 minutes before the train's scheduled departure. We got in and located our train car and cabin. There were only four beds (two double-deckers) in one room, so I had to sleep in another cabin with complete strangers. I was surprised to see that there was already an old lady lying down on the left lower bunk. So, they did not separate men from women in these cabins. I took my place and lay down on the right lower bunk. Later on, a old British man took the upper bunk on my side, and a younger Chinese lady took the left upper bunk. I slept through the whole night with no incident as the train movement was quite smooth. 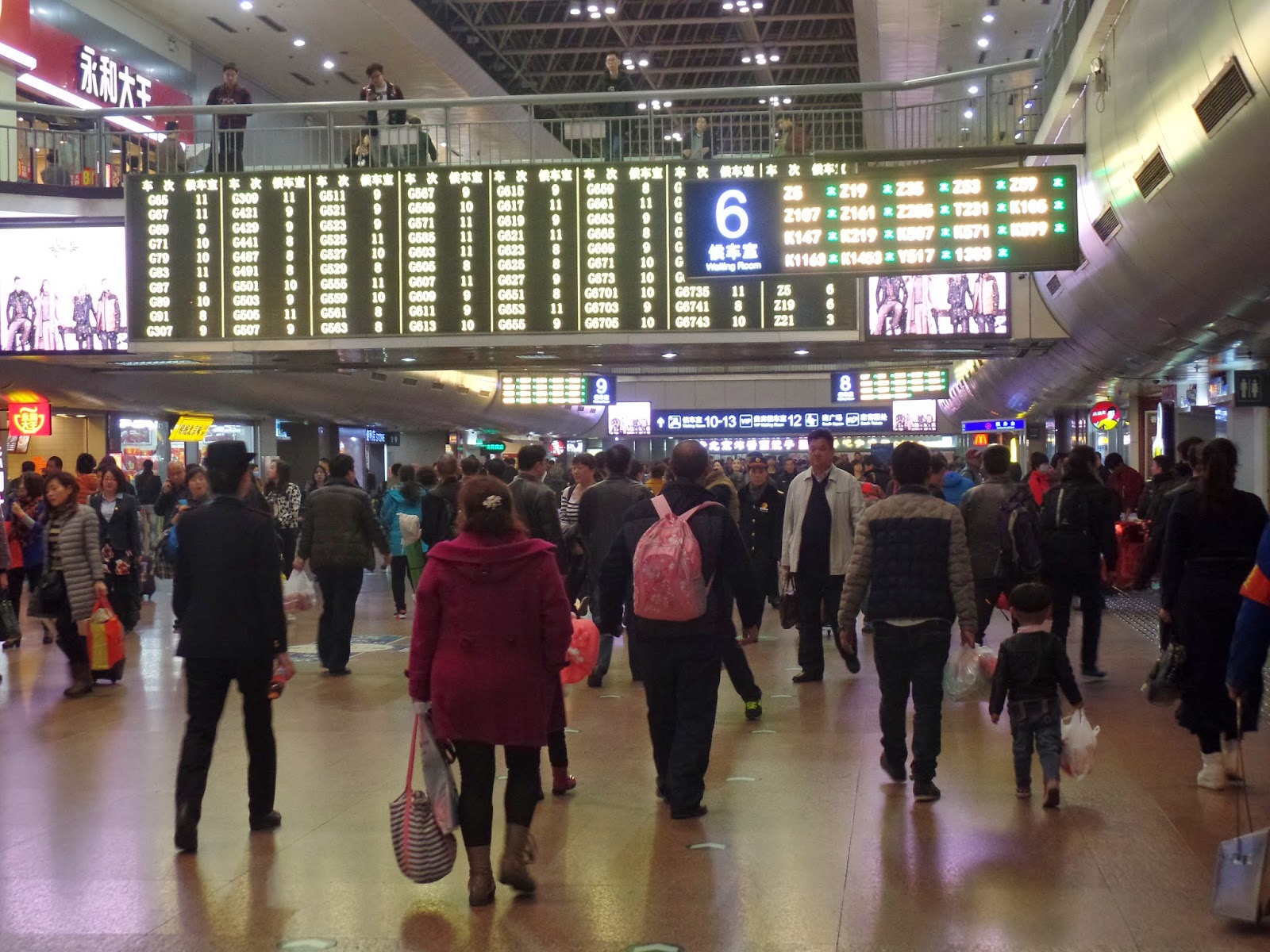 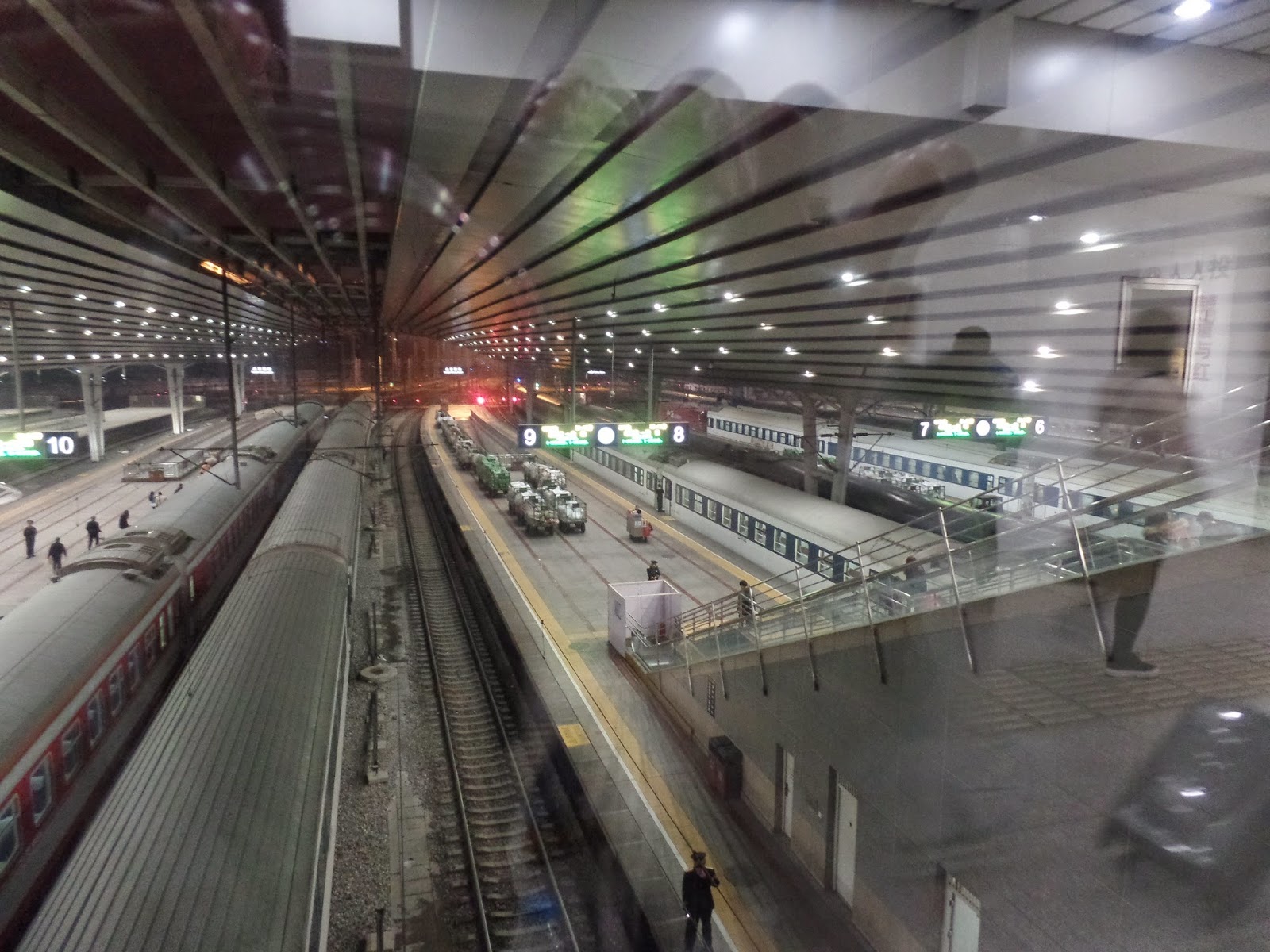 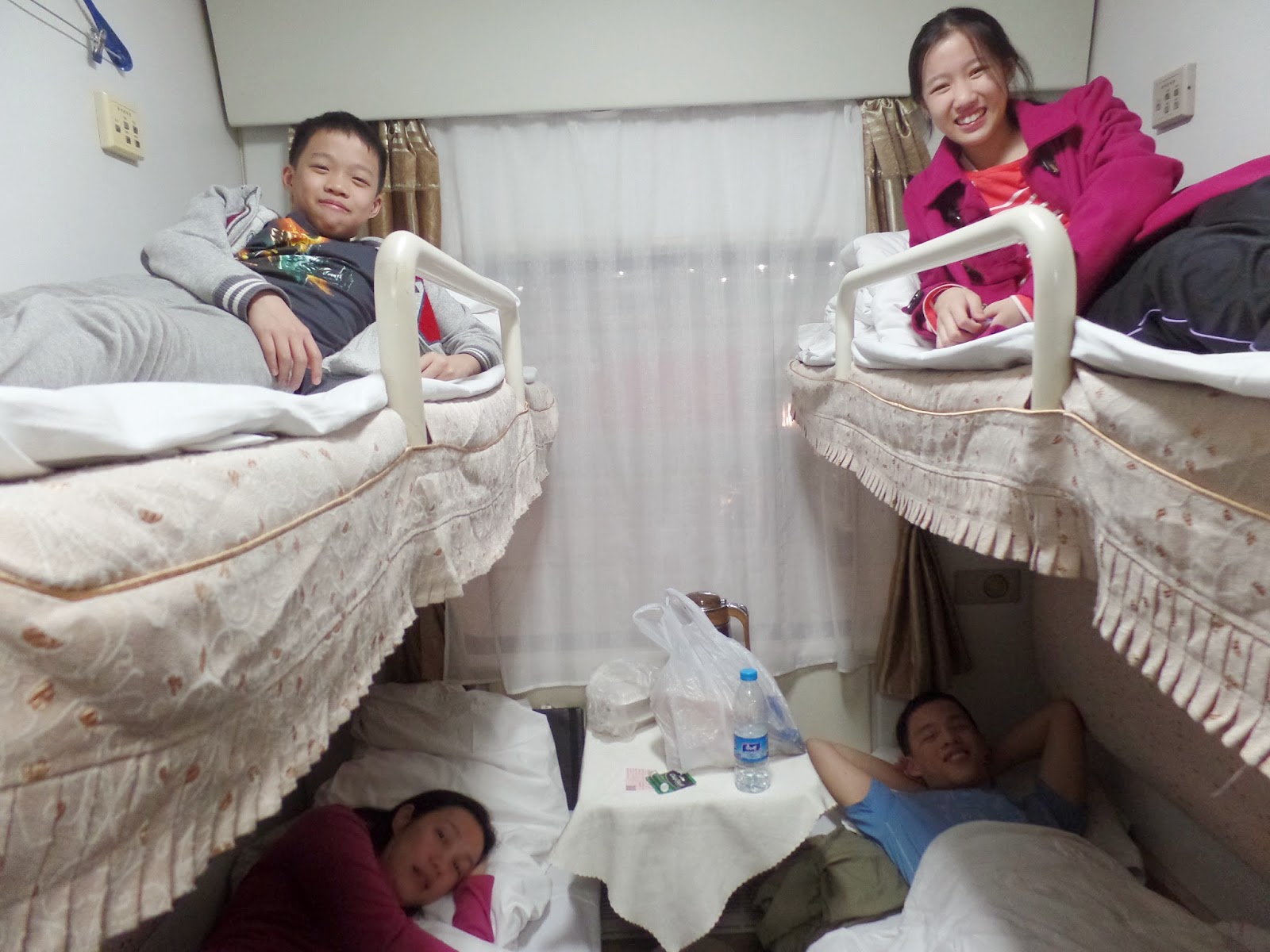