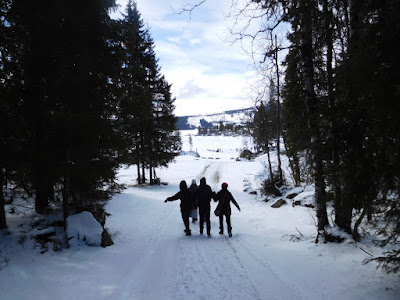 Hiking Down to the Lake


We left our hotel in Fram early right after breakfast to make another three hour bus trip to our next destination. Too bad we did not have time to ride the famous Flåmsbana Railway through the mountains there. After passing through the Laerdal Tunnel again, we went off to another fork in the road that seemed to go around the fjord itself. The trip gave us more picturesque views of snow-capped mountains and the water -- scenes we thought we would only see in calendars. The houses we see along the roads going to Beitovegen were so desolate with nary a sign of human life. 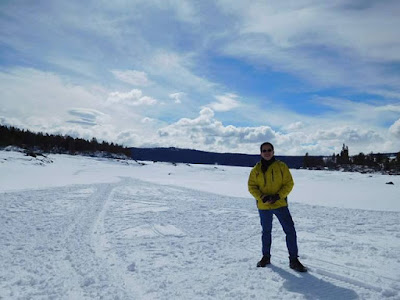 On the Frozen Lake

After a quick bathroom break at nearby supermarket in Beitostolen, we turned back to our destination for the day: Beito Husky Tours. We were met by a friendly Spanish lady named Elena who introduced their place to us. We then hiked down to the frozen Lake Oyangen where our husky sleds were waiting. Lucky my hiking shoes (not really meant for snow) were able to keep me upright during the long hike down the slippery snowy slopes. (Those who could not hike down could take a car down.) 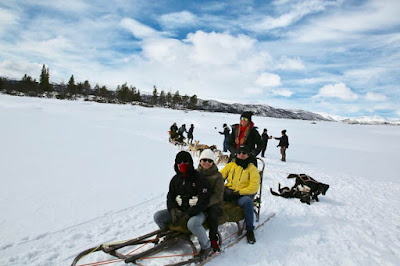 When we reached the frozen lake covered with a thick layer of freshly fallen snow, we had to wait for our turn for the sleds. Each sled pulled by a team of 8 Alaskan (NOT Siberian) huskies can only take 3-4 riders depending on the size of the riders. While waiting, we used the time taking photographs in this winter wonderland -- fun shots, action shots, snow angels, jump shots, dramatic emo shots -- the works. 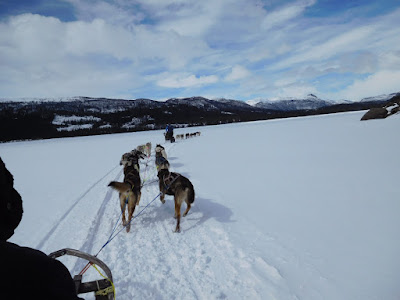 View from the Sled

When the turn of my group came, we were assigned to the sled driven by a girl with golden braids named Elin. The dogs may look thin and wiry, but they were all very energetic in running on the snow and pulling our sled along for the ride. The surrounding scenery was breathtaking with the snowy mytical mountains of Jotunheimen National Park. The ride was done in what felt like 15 minutes only. We did not get to experience handling or actually driving the dog sled ourselves, as we were expecting. Nevertheless, most of us feel that this snow ride is THE main highlight of our trip to Norway 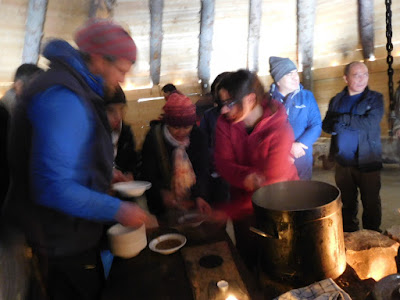 The Wilderness Meal is Served

After everyone had their turn at the ride, we all settled into a wooden structure with a fire burning and food cooking inside. This was called the Wilderness Meal, which consisted of a tasty sausage-vegetable soup with a main course of deliciously tender venison. I was very nervous about this meal at first, but after tasting it, I count it as one of the best meals I've had in Norway. After the meal, we all trudged all the way back up the mountain to the buses for our 5 hour trip back to Oslo. 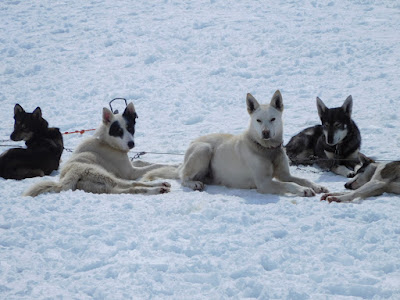